A Library of Classics, Edited for the Teething Set 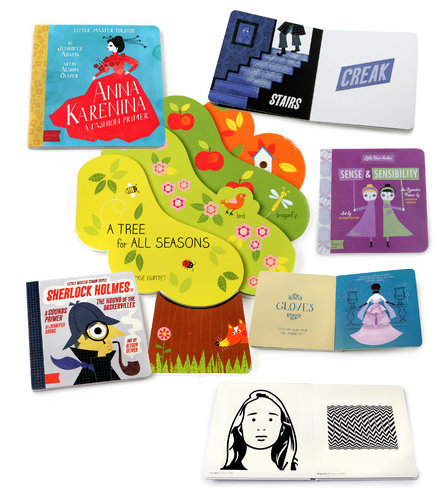 The humble board book, with its cardboard-thick pages, gently rounded corners and simple concepts for babies, was once designed to be chewed as much as read.

But today’s babies and toddlers are treated to board books that are miniature works of literary art: classics like “Romeo and Juliet,” “Sense and Sensibility” and “Les Misérables”; luxuriously produced counting primers with complex graphic elements; and even an “Art for Baby” book featuring images by the contemporary artists Damien Hirst and Paul Morrison.

Booksellers say that parents are flocking to these books, even if the idea that a 2-year-old could understand “Moby-Dick” seems absurd on the face of it. A toddler might not be expected to follow the plot, but she could learn about harpoons, ships and waves, with quotes alongside (“The waves rolled by like scrolls of silver”).

Publishers of these books are catering to parents who follow the latest advice by child-development experts to read to babies early and often, and who believe that children can display aesthetic preferences even while they are crawling and eating puréed foods.

“If we’re going to play classical music to our babies in the womb and teach them foreign languages at an early age, then we’re going to want to expose babies to fine art and literature,” said Linda Bubon, an owner and children’s book buyer at Women & Children First, a bookstore in Chicago. “Now we know there are things we can do to stimulate the mind of a baby.”

Suzanne Gibbs Taylor, the associate publisher and creative director of Gibbs Smith, a small publisher in Salt Lake City that conceived the popular BabyLitseries, said she realized that no one had ever “taken Jane Austen and made it for babies.”

While the BabyLit books do not try to lay out a complicated narrative of “Wuthering Heights” or “Romeo and Juliet,” they use the stories as a springboard to explain counting, colors or the concept of opposites. The popular “Cozy Classics” line of board books, introduced in 2012 by Simply Read Books, a publisher based in Vancouver, B.C., adapts stories like “Moby-Dick” and “Les Misérables” for infants and toddlers using pictures of needle-felted figures of Captain Ahab and Jean Valjean.

“People are realizing that it’s never too young to start putting things in front of them that are a little more meaningful, that have more levels,” said Ms. Taylor, whose BabyLit series has sold about 300,000 books so far. “It’s not so simple as, ‘Here’s a dog, here’s the number 2.’ ”

While the publishing industry is still scraping through the digital revolution, children’s books have remained relatively untouched. Most parents are sticking to print for their young children even when there are e-book versions or apps available, and videos like the once ubiquitous “Baby Einstein,” founded in 1997 as a fast-track to infant genius, have fallen out of fashion.

The American Academy of Pediatrics recommends that television should be avoided for children younger than 2 years old, and studies have suggested that babies and toddlers receive much greater benefit from real interactions than from experiences involving video screens.

“There has been a proliferation of focus on early childhood development on the education side,” said John Mendelson, the sales director at Candlewick Press, “as well as on the retail side.”

Board books, traditionally for newborns to 3-year-olds, have always been a smaller and somewhat neglected category in the publishing business, compared with the larger and more expensive hardcover picture books designed for children of reading age.

But board books may be catching up. Libraries that used to shun the genre are now buying them from publishers. Bookstores are making more room for board books on their shelves. And while a board book might have once been too insubstantial a gift to bring to a child’s birthday party, the newer, highly stylized versions (that can run up to $15) would easily pass muster.

“A board book was little more than a teething ring,” said Christopher Franceschelli, who directs Handprint Books, an imprint of Chronicle Books. “I think as picture books have developed in the last 20 years, parents, librarians, teachers have thought, ‘Why should board books be any less than their older siblings?’ ”

In 2012, Abrams Books, the art-book publisher, created a new imprint, Abrams Appleseed, to focus on books for babies, toddlers and preschoolers. Since then, it has published high-end books like “Pantone: Color Puzzles,” released this month, which uses intricate drawings and puzzle pieces to teach children the differences between colors like peacock blue and nighttime blue.

“If you look at board books from 15 years ago, it looks like the stuff on there was pulled off the Internet somewhere,” said Cecily Kaiser, the publishing director of Abrams Appleseed. “Now there’s a real embrace of a much more artful style.”

At Chronicle, a San Francisco-based publisher, sales of board books have been rising for at least two to three years. Editors there have experimented with books that attempt interactivity, such as a line of books with finger puppets. “We’re in this era of mass good design for everybody,” said Ginee Seo, the children’s publishing director at Chronicle. “You’re seeing good design at Target; you can buy Jonathan Adler at Barnes & Noble. You’re not willing to accept the cheesy clip art on a board book.”

Jon Yaged, the president and publisher of Macmillan Children’s Publishing Group, said the demand for board books has driven him to release more of them in recent years. He has also added ornate flourishes: on the cover of a new edition of “The Pout-Pout Fish,” the title reads in a shiny gold foil, a touch that would normally have been reserved for a more expensive picture book.

Cindy Hudson, a guidebook author and mother of two in Portland, Ore., who runs a Web site suggesting books for parents to read with their children, said she doubted a baby would “benefit intellectually” from being exposed to Tolstoy or the Brontë sisters.

Still, “anything that encourages that interaction between babies and parents is a good thing,” she said. “That’s where the learning and the bonding comes from.”