By
MOIRA HODGSON
Feb. 7, 2014 5:43 p.m. ET
‘Although this memorable Queen was a man” begins the chapter on Elizabeth I in one of my favorite childhood books, the parody history “1066 and All That.” Of course she wasn’t a man, but because the queen never married, rumors about her gender, physical deformities, illegitimate children and secret love affairs persisted throughout her 45-year reign. She has remained an object of fascination for every generation since, inspiring books, plays, songs, operas and memorable portrayals on the screen by great actresses such as Bette Davis, Glenda Jackson, Helen Mirren and most recently, Cate Blanchett.

“The Queen’s Bed,” by historian Anna Whitelock, focuses in particular on the ladies in waiting who formed her inner circle. They knew her secrets and acted as her bodyguards. Although the book covers much familiar territory, it is filled with fascinating details of life at her court, with eyewitness accounts from diaries, letters and pamphlets. 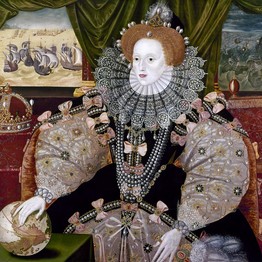 The ‘Armada Portrait’ (1588) of Elizabeth I by George Gower, which depicts the English fleet’s victory over the Spanish. The Granger Collection

Ms. Whitelock begins her story when Elizabeth (1533-1603) was a 13-year-old girl, “serious yet striking, with fair skin, reddish-gold hair, a slender face and piercing coal-black eyes.” She was just 2½ years old when her father, Henry VIII, executed her mother, Anne Boleyn, for high treason. Following his death in 1547, Elizabeth moved in with her stepmother Katherine Parr, Henry’s sixth wife, with whom she was close. But their relationship was soon tested when Katherine married the handsome, flamboyant 40-year-old Thomas Seymour. He would unlock the door of Elizabeth’s bedchamber and “strike her upon the back or the buttocks familiarly” or try to kiss her. When Katherine had had enough of this, Elizabeth was sent away to live with the sister of her long-serving governess, Kat Ashley, and rumors, which were never proved, began to circulate that the girl was pregnant with Seymour’s child.

Ms. Whitelock sees the experience with Seymour as a valuable lesson for Elizabeth, teaching her “that her sexual reputation was an important political currency and the ladies who attended on her were the key custodians of her honor.”

Elizabeth’s bedchamber, where she was looked after by these ladies, was the heart of the court. Ms. Whitelock describes it as “a dark and airless place; weak candlelight lit up the gold ceiling and rich tapestries of glistening threads which hung on the walls.” The bed was adorned with sumptuous quilts, and at night the queen was always joined by a trusted sleeping companion. She was an insomniac and scared of the dark, as well she might have been. Her accession to the throne as a Protestant in 1558 set off an era of paranoia and fear punctuated by Catholic plots against her person, some as bizarre as poisoning the pommel of her velvet saddle or burying a waxen effigy of her “pierced with hog’s bristles” in a dung heap, where it would melt and slowly kill her. As long as Elizabeth had no husband or successor, she was in danger.

The women who attended Elizabeth came mostly from aristocratic families, but their lives at court were hard. Those who bore children were made to deliver them to a wet nurse and return at once to the queen. If they married without her permission there was hell to pay: banishment or even the Tower (one had her finger broken by the enraged queen’s hairbrush). After Mary Sidney nursed the queen through smallpox, she caught it herself and ended up hideously scarred, becoming, according to her husband, Sir Henry, “as foul a lady as the small pox could make her.”

The women’s lodgings were often poor, the maids of honor sleeping dormitory-style next-door to the queen. In one of Ms. Whitelock’s many wonderful nuggets of information, she tells us that Sir William Knollys, Elizabeth’s cousin and Comptroller of the Royal Household, was so frustrated when their “frisking and heying about” kept him awake in his room that he appeared before them in his nightgown and read them obscene Italian sonnets.

Ms. Whitelock comes up with a trove of interesting facts about Elizabeth’s daily toilette. “She relied on cosmetics to produce her famous ivory complexion. A meringue-like concoction of egg white, powdered eggshell, alum, borax and poppy seeds mixed with mill water and beaten until a froth stood on it three fingers deep was applied to her skin,” as well as mercury sublimate for a “translucent glow” and rouge and lip salves made with lead carbonate and lead hydroxide.

Regular baths weren’t the norm, but Elizabeth was described as having one every month, “whether she needs it or no.” She cleaned her teeth with a mixture of vinegar and white wine boiled with honey, and washed her hair with lye.

Dubious habits, such as a lifelong addiction to marzipan, took their toll. “Over the five decades of her rule, Elizabeth changed from being a young vibrant queen with a pale pretty face, golden hair and slender physique, to a wrinkled old woman with rotten teeth, garishly slathered in jewels and cosmetics to distract from her pitted complexion, and wearing a reddish wig to cover her balding head.” Yet at the same time, one ambassador noted, she would wear decolletage so deep that “one could see all her belly, even her navel.”

As Elizabeth grew older her facial portraits remained unchanged, to ensure an image of longevity and continuity. Artists had to insert the same blanched, masklike face into different arrangements of hair, jewelry and dress—she owned over 3,000 gowns—transforming her into a radiant and powerful “Gloriana.”

Only the ladies in waiting were allowed to see the queen in her natural state. But one day her current favorite, the Earl of Essex, who was 32 years younger than she, famously did what no man had done before. He burst unannounced into her bedchamber, where he found her sitting half-undressed, her face free of makeup, her bald head without her wig, wisps of gray “hanging about her ears.” It wasn’t the only reason he lost his head within the year, but it certainly helped.

Although she chronicles Elizabeth’s encounters with her various suitors in depth, Ms. Whitelock never tries to answer why the queen decided not to marry. She points out that Elizabeth brilliantly turned the notion of her virginity into a national asset, “identifying her impenetrable female body with her inviolable island realm.” Her body, she writes, “represented the body politic, the very state itself.”

The queen left firm instructions that her corpse was not to be examined in any way or embalmed after her death. Her ladies, of course, followed her orders religiously, and Elizabeth’s secrets were kept to the end.

—Ms. Hodgson is the author of “It Seemed Like a Good Idea at the Time: My Adventures in Life and Food.”