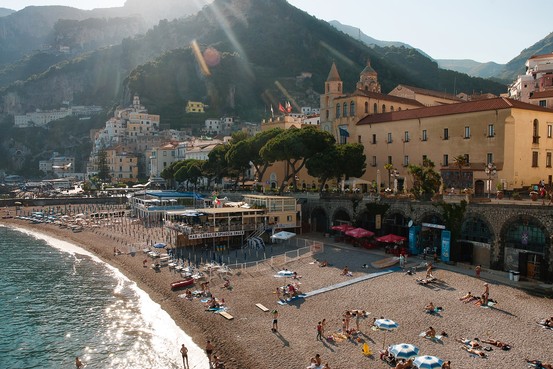 COSTIERA AMALFITANA, as it’s known in Italy, has been an “it” destination since Emperors Caligula and Augustus built vacation villas there 2,000 years ago. The magnificent scenery has more recently lured everyone from Liz Taylor to Mark Zuckerberg, and it remains a road-trip dream for many. Perhaps too many—in summer, restaurants and hotels are filled to capacity. Along the cliff-hugging roads the aromas of basil and citrus are overpowered by Vespa and Fiat Cinquecento exhaust; and the Tyrrhenian Sea teems with megayachts. Knowing where to go (and when), is key to getting the most from this coast. 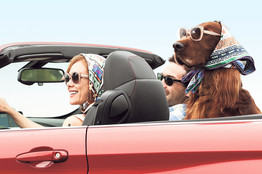 Tourists who do come favor the grand old hotels, so opt for the modern 59-room Romeo Hotel, designed by Pritzker Prize-winning Japanese architect Kenzō Tange (from $306 a night, Via Cristoforo Colombo, 45, romeohotel.it). The Vesuvius views, rooftop pool and Michelin-starred restaurant are great, but its location—a walk from Centro Storico and the ferry terminal—is even better.

Test your wheels on an evening side-trip to the town of Brusciano, on the slopes of Monte Vesuvio. Taverna Estia is a hidden Michelin-starred charmer with a brick fireplace and garden full of rosemary shrubs and cypress trees (Via Guido De Ruggiero, 108, www.tavernaestia.it). Chef Francesco Sposito serves up ornate fare: pecorino- and truffle-stuffed artichokes slow-cooked in extra-virgin olive oil, and strawberry-lacquered goose leg with spinach and foie gras emulsion. 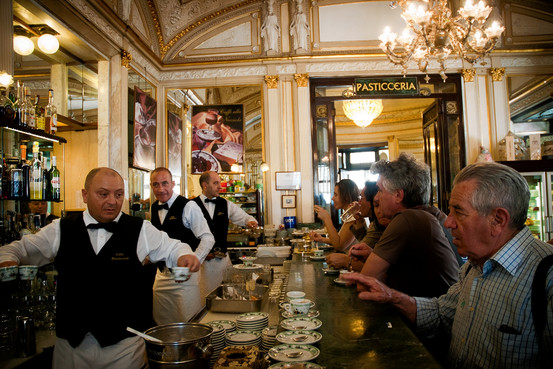 Skip breakfast and opt for an early pizza lunch. D.O.C.-protected Neapolitan pies use San Marzano tomatoes and mozzarella di bufala Campana and bake in a 905-degree oak-fired stone oven for 60 to 90 seconds. The version atL’Antica Pizzeria da Michele was locally beloved for 140 years before Elizabeth Gilbert touted it in “Eat, Pray, Love” (Via Cesare Sersale, 1-3, damichele.net). The $5 pies are eaten with a fork and knife and washed down with Peroni. It’s one of the few pizzerias open all day; lines peak by noon and dwindle by 2 p.m. 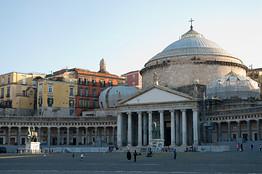 Wander the graffiti-plastered, laundry-strewn streets that spoke from Centro Storico’s Via Tribunali and lead to churches like San Lorenzo Maggiore, built atop an ancient Roman market; the 6th-century Basilica Santa Maria Maggiore Pietrasanta; and San Domenico Maggiore, home to 45 royal Aragonese sepulchers. Behind San Domenico is chocolatier Gay Odin, where you can cool down with a scoop of cioccolato foresta gelato and nab a bow-tied box of classic sweets (Via Benedetto Croce, 61, gay-odin.it).

After lunch, hop on a Capri-bound ferry. As soon as you arrive at the crowded Marina Grande, leave. Drive up Monte Solaro to the elegant Capri Palace in chicer, quieter Anacapri, a favorite hideaway of Claude Debussy and Graham Greene (from $656 a night, Via Capodimonte, 14, capripalace.com). The hotel’s glazed-tile rooms are not huge, but the views are.

Head to the island’s southwestern side—a lack of roads keeps the tourist buses away, as do Via del Pizzolungo’s thousand steps. The scenic two-hour coastal path zigzags to the sea, passing by whitewashed walls and wisteria-shaded artichoke and potato patches. At Punta Massullo, stop to admire the coral-colored Casa Malaparte, a modernist mansion built in 1937 for Italian author Curzio Malaparte (and, sadly, closed to the public). At the trail’s end, take a much-earned dip at the Fontelina Beach Club, overlooking Faraglioni Rocks (Via Faraglioni,fontelina-capri.com). Not to be confused with the adjacent Da Luigi ai Faraglioni, it’s Capri’s best spot to sip an Aperol spritz in the afternoon sun.

Have a quiet dinner at Melos, a small, hidden osteria in Anacapri’s bustling Piazza A. Diaz known for its pizza fritta (fried pizza) (Via Boffe 2, meloscapri.com).

Linger over lunch at Il Riccio, a one-star Michelin restaurant that recently became Capri Palace’s offsite beach club (Via Gradola 4, capripalace.com). It’s tucked into a private cove on the same cliff face as the touristy Grotta Azzurra, but a world apart. The turbot baked in salt, scallops nestled into puréed artichokes and its namesake spaghetti laced with sea urchin are worthwhile splurges. Afterward, pillage the restaurant’s tiled Pudding Room, festooned with Neapolitan pastry, or jump into the sea from the private dock. 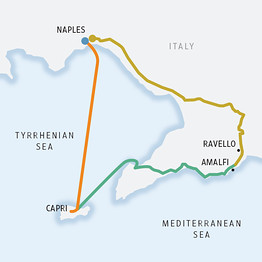 Ferry back to the mainland. Just outside the town of Amalfi is Conca dei Marini’s meticulously renovated 17th-century monastery-turned-hotel Monasterio Santa Rosa (from $450 a night, Via Roma, 2, monasterosantarosa.com). It sits atop a cliff that’s been whittled into a five-tier garden; the infinity pool overlooks the Tyrrhenian Sea. The restaurant and spa are overpriced and skippable, but breakfast cappuccinos and flaky sfogliatelle on the terrace are not to be missed.

Avoid the crowds with a late dinner at Trattoria San Giuseppe (Via Ruggiero II, 4). It’s the real deal—a scattering of al fresco tables at the entrance to an alley with whitewashed arches and street shrines to its eponymous saint. The atmosphere generally trumps the food, but the melted mozzarella sandwiched between lemon leaves and the spaghetti vongole are standouts. Pizza lovers should seek out Pizzeria Donna Stella, hidden in a garden down another alley (Salita Rascica, 2).

The steps of the Amalfi Cathedral—a hybrid of Arab, Norman and Romanesque architecture—are in no way devoid of tourists, but they clear out in the evenings, making for an ideal spot to polish off another gelato. The town’s dozen-plus gelaterias feature unusual flavors like ricotta, gingerbread and sour cherry, but the best is a simple lemon cream or dark chocolate fromTabaccheria Gaetano Camera at 15 Corso delle Repubbliche Marinare, marked by a red “Gelato Artigianale” sign. 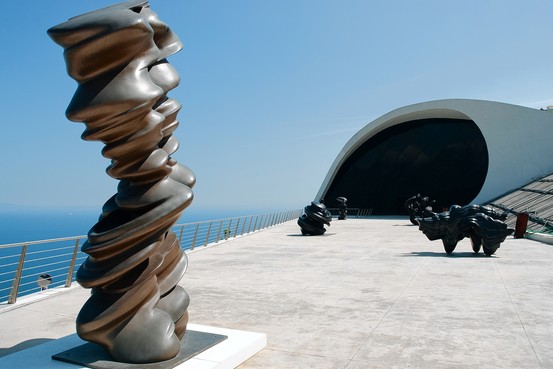 Ravello used to be the tranquil antidote to Positano’s seaside madness, but recent years have seen increasing crowds. Instead of joining the masses at Villa Cimbrone, a former haunt of Bloomsbury darlings, or the 13th-century Villa Rufulo, head to the Oscar Niemeyer Auditorium (Via della Repubblica, 12). The hall opened in 2010 after being in the works for 20 years. The curvaceous, white, incongruous structure is weird and wonderful and sits amid Ravello’s wisteria-adorned pretties like Björk in her swan dress at the Oscars. It’s also skipped by most tourists. This summer it hosts “La Bohème” and California’s Chanticleer chorus.

Back in Napoli, lunch at Ristorante Lo Scoglio, perched at the end of a dock overlooking Nerano Bay (Piazza delle Sirene, 15, hotelloscoglio.com). The simple spaghetti with zucchini, linguine con cicala and zuppa di pesce are likely contenders for the best meal of your life. Don’t miss the verdure miste, a copper pan of cooked seasonal vegetables from the family’s farm, capable of turning any carnivore a bit more green.

This article is part of the Off Duty Summer 50: Fifty Reasons to Love the Road Trip. Click here to see the full list.