Even Long-Married Happy Couples Ask, ‘How Can We Have Sex More Often?’

What to do if you’re in a sexless marriage where it’s been so long that you don’t know where to begin? Bonds columnist Elizabeth Bernstein discusses the science of sex lives, and how to get back on track. Photo: Hasani and Danielle Pettiford.

As a relationship columnist, I hear a lot from male readers whose emails and letters are variations on a theme: “I have a long, stable marriage but we don’t have sex anymore. How can I change this?”

Often, these men describe themselves as heartbroken at the absence of sex in their lives. They deeply miss the intimacy and the connection, but they don’t know how to tell their spouse. “I was raised to be gentleman,” one man married for 30-plus years told me. “So how do I tell my wife I want more sex without sounding like a cave man?”

A lack of sex can certainly signal a serious problem in a marriage, but experts say it isn’t always a sign of crisis. It is normal for happy couples to see their sex life diminish—or possibly even disappear—over time. And it is possible to bring it back.

No sex isn’t a problem if both partners don’t mind, of course. But that is rarely the case. Numerous studies show sex is beneficial for a marriage. Couples who have more sex are happier. According to one recent study, we are happier even if we just think we are having more sex than those around us. 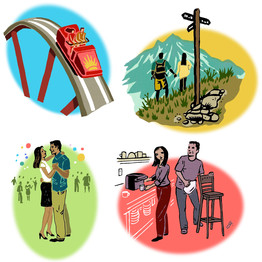 Act Like a Teenager to Make Sparks Fly: Ride a roller-coaster; make ‘accidental’ body contact; have an adventure; dance at a nightclub.

To rekindle the flame, skip the flowers and chocolate. Ditto the plan to get something going on your birthday or anniversary. “These are clichés,” says Justin Lehmiller, a Harvard University social psychologist who studies sexuality. “We’ve been there and done that. The novelty has worn off.”

Step One is to have a conversation with your spouse—and choose your words carefully, says Debby Herbenick, a sex researcher and co-director of the Center for Sexual Health Promotion at Indiana University. “The heart of all this sex stuff is emotional intimacy,” she says. “If you actually want to make changes in your sex life, that’s where you start.”

A brain scan of someone in the early, passionate stages of love looks a lot like the brain of someone on drugs. Each state activates the reward centers that regulate craving, focus, motivation and energy.

Feel-good neurotransmitters such as dopamine drive two people in the early stages of romantic love to have sex with each other as much as possible. But this state of full-blown addiction doesn’t last indefinitely. No one would ever get anything done.

“You don’t eat, you don’t sleep, you’re coming home at noon to have sex,” says Helen Fisher, a Rutgers University research scientist in anthropology. From an evolutionary standpoint, she says, “it’s not a good way to raise babies.” Data suggest the chemical phase of passionate love lasts between one and three years.

After romantic love comes the long-term love of attachment, which is both a deeper bond and less all-consuming. But if you have picked the right mate, romantic love never totally subsides, Dr. Fisher says. And it can be reactivated.

If you feel awkward starting a conversation on this topic, tell your partner and ask for understanding. “Take some baby steps that will lead you there,” Dr. Herbenick says. Instead of saying, “I miss sex” try saying, “I miss the way sex would bring us together.”

Research suggests a way to ignite the fire is simply to try something new together. Whether it’s a new restaurant, vacation spot or hobby, any kind of novelty drives up dopamine levels in the brain—the same thing that happens when you fall in love. Even if these experiences aren’t sexual, they may trigger passion.

Research has shown married couples have more sex than couples who are either dating or living together. Most people in marriages of 25 years or more are satisfied both in the relationship and sexually, according to unpublished research by Indiana University’s Dr. Herbenick.

But “sizable” numbers of men and women aren’t satisfied, she says. When asked what they want to improve in their sex lives, men tend to say they want more sex. Women say that, too. But they also want more emotional intimacy, she says. “Many of the women were explicit that if the sex made them feel more loved and connected, that their partner desired them specifically and not just sex, then they would want it more often,” Dr. Herbenick says. 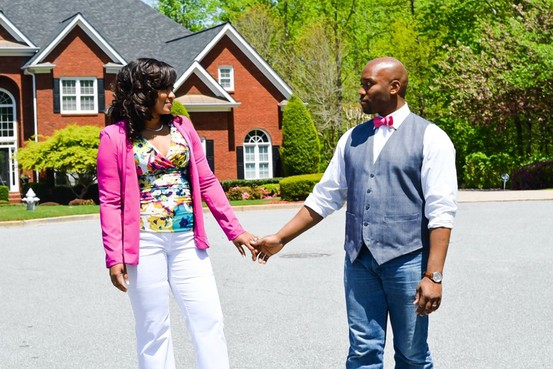 Getting the Spark Back | Danielle and Hasani Pettiford, of Atlanta, worked on connecting more and having more fun experiences together as a way to improve their sex life. Kelli Morales

Hasani Pettiford is an Atlanta motivational speaker and relationship coach whose Couples Academy counsels people in long-term monogamous relationships. When he and his wife, Danielle, were newlyweds, he says, they had sex several times a week—in the bedroom, living room, kitchen and car. But things changed when they started having children. Mr. Pettiford was just getting his career started, and they were busy and stressed about money.

Occasionally, Mr. Pettiford would suggest they have sex later that night. “I was exhausted, washing clothes and dishes and cleaning up baby spit all day,” Ms. Pettiford says. “Here he’d come, wanting to rub my leg. I would think, ‘Are you kidding me?’ ” Often, she would put her hair up in a ponytail, put on her oldest sweatpants and T-shirt and pray her husband would forget he asked.

The couple was barely having sex once a month—and it wasn’t very satisfying, they both say. “It became duty sex for both of us,” Mr. Pettiford says. “There was no passion, no intimacy, no desire to please.”

Ms. Pettiford says she began to begrudge the time her husband spent traveling for work. And he began to feel left out at home. “I felt like I was competing with my children for my wife’s attention,” Mr. Pettiford says.

Mr. Pettiford realized he had to do something. He did some research and bought a set of DVDs, “Hidden Keys to Loving Relationships” by Gary Smalley, and insisted that he and his wife watch them together. She rolled her eyes and sat through the programs silently, she says.

Mr. Pettiford began implementing the series’ advice right away. He gave his wife more compliments and gifts, took on more chores and made sure she had time to herself.

He says he tried to “put the Romeo back on.” He suggested they each list their best experiences together—a helicopter ride around the city, a picnic at home in front of the fire—and then they did them again. They also decided to try new things—Indian food, ice skating, a movie in a new neighborhood. Even the “misses” were fun. They hated raw oysters, but the idea of sampling an “aphrodisiac” got them into bed.

Most importantly, he began to listen to her, changing his tone of voice from critical to supportive and loving. When it comes to working on their sex lives, Mr. Pettiford, now 37, says, “men focus on positions and techniques, but it’s so not about that at all. Foreplay starts at the beginning of the day.”

Now, the couple schedules sex twice a week, after their four daughters, all under the age of 10, are asleep. On Tuesdays and Fridays, Ms. Pettiford, 37 and a graphic designer, straightens her hair and gets out her best lingerie. Sometimes in the morning, Mr. Pettiford will tell her, “I want you tonight.” Her answer, half joking: “That depends on if you treat me right today.” “I take it as a challenge,” Mr. Pettiford says.