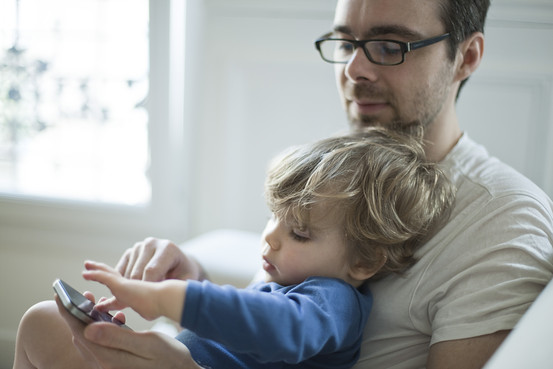 In a study, the more involved a man was in parenting, the more he showed activation in a part of the brain related to reward—which makes sense. Getty Images

Life is full of trade-offs. There’s speed versus accuracy, breadth versus depth. And then there’s the storied trade-off about men, who supposedly can’t have a lot of blood flow to their crotch and their brain at the same time. Recent work suggests that, in a general sense, things really do work that way.

Evolution isn’t about survival of the fittest; instead, fitness is about passing as many copies of your genes as possible into the next generation. In some species, males pursue this goal with quantity over quality, fathering as many offspring as possible and doing zilch in terms of parenting. Most male fish release a cloud of sperm over a cloud of a zillion eggs and then skip town. Among primates, a male baboon typically mates with anyone willing, and is minimally paternal.

But some species do quality over quantity. Male swans are picky about whom they mate with, since they do lots of the child care, including stints of sitting on eggs. Male marmoset monkeys do most of the parenting and generally mate with just one female. What’s the payoff? Fewer children, but ones that are more likely to survive, thrive and pass on copies of their genes.

In other words, across species, there is a male trade-off between mating and parenting.

So what about humans? Obviously, there’s tons of variability, from Ramses II, who had well over 100 children (and probably didn’t know them from Moses) to the ever-involved Mike Brady of “The Brady Bunch” at the other extreme.

Such individual variation was the subject of a 2013 paper by Jennifer Mascaro, Patrick D. Hackett and James Rilling of Emory University, published in the Proceedings of the National Academy of Sciences. Fathers of toddlers answered a questionnaire about parental involvement (for example, indicating how much of various parenting chores each parent does). Well, you know how accurate self-reporting like that is going to be…. But, remarkably, the mothers tended to agree with the assessments, suggesting these were reliable data.

Next, they tossed each man into a brain scanner and flashed up pictures of faces. That sequence included a picture of his child. The more involved a man was in parenting, the more he showed activation in a part of the brain related to reward—which makes sense.

Isn’t that interesting? We already knew that fathers have lower testosterone levels than do either married men without children or unmarried men. What the new study shows is that this effect is most pronounced in the most intensely paternal men.

Thus we have a chicken-and egg-question. Did men who had low testosterone levels at the time they became fathers become the most paternal? Or did the intense paternalism come first, followed by a decline in testosterone? The latter, as shown in other studies.

How might that work? What prompts the brain to stimulate testosterone secretion and increase testicular volume? Oh, you know—thoughts, preoccupations and behaviors of a certain nature. Which there’s less of in men who are contentedly immersed in some very different pursuits.

So has science finally shown that you can’t be a good father and also have big cojones? That’s probably a smidgen too simplistic of a conclusion. What most interests me is that this study shows a trade-off so easily ascribed to cultural values dovetailing so completely with the evolutionary trade-offs faced by other animals. Reading “Goodnight Moon” to your child and then spending a long night clubbing aren’t readily compatible activities for any species.