The Real Reason Couples Have Sex

Why do married couples have sex, and how can they have better sex? The answers are more complicated than you might think, according to two new studies. Elizabeth Bernstein reports and Julie and Bob Brinton share their personal perspectives. Photo: Getty Images.

For years, Julie Brinton’s days have been filled with sippy cups and skinned knees, and the endless push of getting three young children through dinner time, bath time, bedtime. By the time she crawls into bed each night, she has one thing on her mind: zoning out to an hour or so of TV.

But some nights, her husband, Rob, reaches over to rub her shoulders and offer her a back rub. And then Ms. Brinton thinks: “Has it really been three weeks? I guess we should probably have sex.” 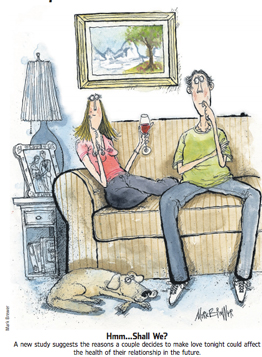 Mr. Brinton, also 34, appreciates his wife’s gesture. “But afterward,” he says, “I always feel guilty, that I’ve been selfish.”

Therapists have long known that couples who have more, and better, sex are happier and more stable.

But new research from the University of Toronto shows that the reasons why partners have sex in the first place also significantly affect marital satisfaction. And a person’s motive for making love tonight may make a difference to the health of his or her relationship months from now.

For many years, scientists believed that humans had sex for a few simple reasons: to reproduce, experience physical pleasure or relieve sexual tension. Then a 2007 study from the University of Texas identified 237 expressed motives for sex. The reasons ranged from the mundane (stress reduction) to the spiritual (to get closer to God) and from the altruistic (to make the other person feel good) to the spiteful (to retaliate against a partner who cheated by cheating).

Now, two studies by University of Toronto researchers published this month in the journal Personality and Social Psychology Bulletin, have divided the most common reasons why people have sex—and the ones most relevant to long-term relationships—into two broad categories of motivation: approach and avoidance. Approach motives pursue a positive outcome. (“I want to increase intimacy with my spouse” or “I want to feel closer to my partner.”) Avoidance motives aim to evade a negative outcome. (“I want to avoid conflict” or “I don’t want to feel guilty.”)

Each category is also divided into subcategories: self-focused or partner-focused.

The researchers paid particular attention to partner-focused goals. “They have the greatest impact on the outcomes of a relationship,” says Amy Muise, a postdoctoral fellow at the University of Toronto and lead researcher on the study.

When Scientists Speak of Sex

Researchers at the University of Toronto asked couples to track their sexual motivation. Here are the terms they identified:

Both studies were what researchers call “daily diary” studies. In the first, 108 heterosexual dating couples completed a survey every day for two weeks. On days that they had sex, the partners each answered 26 questions about their motives, rating them from 1 to 7. Examples: “To prevent my partner from becoming upset” or “To feel better about myself.” They also rated their relationship satisfaction, sexual satisfaction and desire each day.

Even more interesting, the researchers say: A person’s sexual motivation affected his or her partner’s gratification. When someone had sex for positive reasons, the partner felt more desire and relationship satisfaction. When someone had sex for negative reasons, the partner felt less satisfied in the relationship and less sexually satisfied.

The researchers found no difference when it came to gender. “Men do have higher desire in general, but the motives for sex and the way they make people feel aren’t different for men and women,” says Dr. Muise.

Also, regardless of how often a couple had sex, the results of the research were the same.

“One thing we wanted to know is whether it really matters to your partner why you want to have sex, as long as they are getting what they want,” says Dr. Muise. The answer, she says, is yes. “If I am having sex more for approach goals, it increases my desire and satisfaction, so my partner probably senses that and it contributes to their outcome. Our satisfaction carries over to them.”

The second study followed 44 married or cohabitating couples for three weeks—and then followed up four months later. The results were very similar to the first study.

So is it better to have sex for negative, or avoidance, reasons than not at all? The answer is complicated. Research shows that on days when we have sex we feel more satisfied in our relationship than on days when we don’t. And yet when people have sex more often for negative motives, the bad outcomes build up. Dr. Muise’s conclusion: “Unless the sex is highly avoidance motivated, it might be OK in the moment,” she says. “But you definitely get more benefits from approach motivation.”

How can you become more positively motivated when it comes to sex? If you’re feeling like you’d just rather go to sleep, try tuning into the emotional connection between you and your partner, says Julie Hanks, a clinical social worker in Salt Lake City. “Lead with what you want instead of what you don’t want to happen,” she says.

About a year ago, Ms. Brinton decided she and her husband needed to work on their sex life. “I thought, ‘I want to enjoy sex. I want to feel connected to my husband. I want to reclaim my sexuality.’ ”

Ms. Brinton also asked her husband to go to a sex therapist with her.

Her husband says he was thrilled. He figured there would be a lot of sex as homework. But, at least initially, their homework was to focus on real communication—not just small talk—about issues unrelated to sex. “I came to realize that you can’t have a great, intimate sex life until you have learned to connect outside of the bedroom,” says Mr. Brinton, who owns a custom-framing business.

Eventually, their conversations led to talk of sex—and then more sex. Once “we knew how to talk about other things, we felt comfortable with the difficult questions about what the other person likes in bed,” says Mr. Brinton.

They say they are both careful to focus on feeling good. “Every reason we have sex now is a positive for me,” says Ms. Brinton.