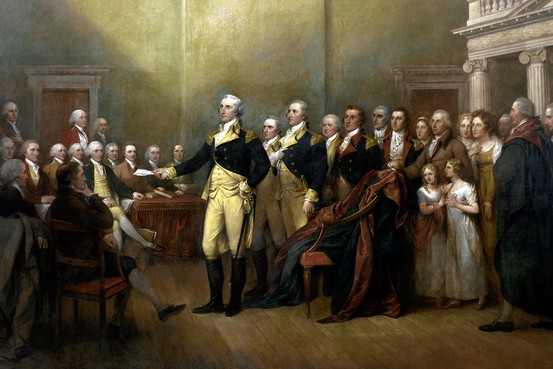 One day toward the end of the Revolution, the expatriate American painter Benjamin West fell into a conversation about the war with George III (although one would think His Majesty would hardly have welcomed the topic). West said he believed that when the fighting was done, George Washington would retire. The king was incredulous: “If he does that, he will be the greatest man in the world.”

When Washington did just that in 1783, another American artist, John Trumbull, wrote from London to say that the resignation “excites the astonishment and admiration of this part of the world. ’Tis a Conduct so novel, so inconceivable to People, who, far from giving up powers they possess, are willing to convulse the Empire to acquire more.”

In a career eventful enough to include the attack on Trenton that saved his cause, the siege of Yorktown that put an end to the war he led, and his tenure as the first president of the United States, Washington’s withdrawal to private life might seem a rather anticlimactic moment to choose for opening a book. But in his fine and engrossing “The Return of George Washington,” Edward J. Larson makes the case that Washington never really did step down at all.

THE RETURN OF GEORGE WASHINGTON

If never considered exactly wilderness years, the span between the end of the war and Washington’s presidency is often seen as a hiatus in which the Virginia planter put his estate in order and then shed legitimacy on the Constitutional Convention in Philadelphia solely by his taciturn presence. But Mr. Larson, a history professor at Pepperdine University, engagingly argues that the stretch between 1783 and 1789 was as important to Washington—and to America—as all that preceded and followed it.

It is not that Washington wasn’t quite sincere in his wish to recede from public life and, as he wrote, “become a private citizen of America, on the banks of the Potowmac; where under my own Vine and my own fig tree—free from the bustle of a camp & intrigues of a Court, I shall view the busy world, ‘in the calm lights of mild philosophy.’ ”

But once he got under his fig tree he was vexed with worries about his fledgling nation. At first these took the form simply of wanting his former troops to be paid, and not in the increasingly debased paper money that the new states were spewing out. He had fought for his country from New England to the Carolinas, and his travails had given him a truly national vision. He wrote to Congress, then trying to wield the feeble powers established by the Articles of Confederation, that “it is indispensable to the happiness of the individual States, that there should be lodged somewhere, a Supreme Power to regulate and govern the general concerns of the Confederated Republic.”

Washington’s worries were almost immediately exacerbated as he took stock of his holdings, which included frontier tracts in Pennsylvania and western Virginia. The further he got from Mount Vernon, the more worried he became. He found the inhabitants increasingly fractious and only sketchily loyal to their new nation. “The Western settlers . . . stand as it were upon a pivot; the touch of a feather, would turn them any way.” Into the arms of Spain, for instance, which controlled the mouth of the Mississippi and the western lands beyond it. “The ties of consanguinity which are weakening every day will soon be no bond,” Washington warned.

Washington believed that only a common interest supported by a vigorous central government and nourished by commercial ties could prevent the fragmentation of his bafflingly large country. The best way to work this, he said, was through building canals, which would benefit both private investors and the nation as a whole. “That was how he had seen the American Revolution,” writes Mr. Larson, “and that would be how he would see the Constitution: viable and worthwhile because they served common and individual interests.”

He found his unifying vision everywhere threatened. The failure of state-issued money was leading to open insurrection by citizens burdened with the worthless paper; they attacked courthouses throughout the country. To his old lieutenant Henry Knox he wrote: “Good God! there are combustibles in every state, which a spark may set fire to!”

In 1786, he wrote John Jay, then secretary of foreign affairs: “What a triumph for the advocates of despotism to find that we are incapable of governing ourselves, and that systems founded on the basis of equal liberty are merely ideal & fallacious! Would to God that wise measures may be taken in time to avert the consequences we have but too much reason to apprehend.”

Mr. Larson’s splendid account illumines those wise measures and how they were taken—or rather, how George Washington took them. When Congress called the Constitutional Convention in 1787, it needed Washington to give stature to the proceedings. He shrank from seeming to promote himself, but he also knew that there was only one figure who stood tall enough to command the allegiance of the whole nation. As the sour, funny, hectoring John Adams groused, all anybody was likely to remember about the Revolution was “that Dr. Franklin’s electric rod smote the earth and out sprang George Washington. That Franklin electrified him . . . and thence forward those two conducted all the Policy, Negotiations, Legislations and War.” Franklin, however, was in his 80s. It is startling to remember that when Washington said farewell to the Continental Army he had been only 51 years old, with plenty of vigor left in his big frame.

Washington was coy about going to the Convention until he was reasonably confident that the deliberations would bring about some valid result. After all, he had his dignity to consider. But he also knew very well that he would be more than a dignified presence. He was determined not to be seen as backing any of the factions that were already beginning to emerge, but he led one nonetheless: He was a federalist who wanted a strong national government and was opposed to the anti-federalists, who worried that such an institution would douse the liberties won over eight mortal years.

Washington proved a subtle (had it been in a lesser cause, he might be called “sly”) proponent of his beliefs, and Mr. Larson brings an invigorating immediacy to the wranglings that went on among the delegates charged with inventing a wholly new form of government—one in which the rulers were obedient to the ruled rather than the other way around—with no previous experience to draw upon save old democracies dimly glimpsed through the mists of antiquity and the tepid example of Swiss cantons.

Should there even be a president? Edmund Randolph, Washington’s fellow Virginian, vividly said that giving such power to an individual would be “the fetus of monarchy.” Well then, what about three presidents? Anyone who has gone on a vacation with two other people knows how well that would have worked. Quietly, discreetly, Washington, as Mr. Larson puts it, “hijacked” the convention.

Between the sessions, in taverns and in the houses of the rich, he spoke all the time, making his views known although insisting that they be concealed from the press. In the end, the appealingly named Committee on Style polished up the draft Constitution and sent it out to the states for ratification. “Washington’s signature on the transmittal letter and accompanying resolutions,” writes Mr. Larson, “ensured they would command attention. Indeed, they made it look as if the Constitution came from him.”

It largely had. Small states would enjoy equal representation with large ones in a senate; commercial states would have access to national markets; there would be no more state-issued paper money; and, perhaps most of all, there would be a strong president. Although Washington had many doubts about the particulars that the delegates had finally agreed upon, the newborn polity took the shape he envisioned. “Be assured,” wrote the delegate James Monroe, “his influence carried the government.”

Many today are unsatisfied with the intricate, loose-jointed machine whose building Washington oversaw during the stifling Philadelphia summer of 1787, but it is hard to finish reading this valuable, lively account without feeling that we were damned lucky to get it.

—Mr. Snow is the former editor in chief of American Heritage magazine and the author of “I Invented the Modern Age: The Rise of Henry Ford.”