The Rainbow Collection: Pigments and Painting 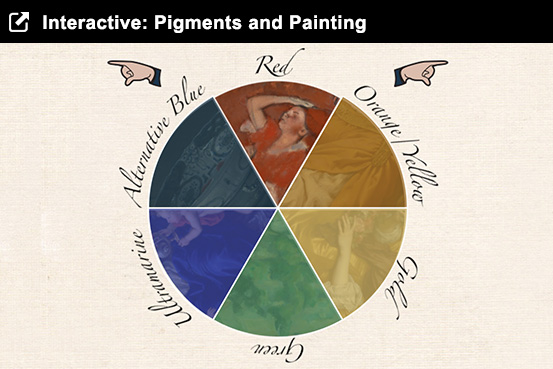 Centuries before tech crunchers created computer codes to enable every color in the universe to appear on smartphone screens, European artists were frantically researching often unconventional ways to mix pigments to transfer the images around them to analog canvases. Here, a peek behind the development of several key colors. Photos: The National Gallery, London

Behind the colors of the serene madonnas and bucolic landscapes of centuries past lay European artists’ frenetic, exhaustive efforts to obtain just the right pigment.

“We think of color as such a simple thing. We’re surrounded by it on our screens, our pages, but for artists in most of history, color was not so simple: They had problems with [achieving] intensity, with prices, with fading,” says Caroline Campbell, a curator at London’s National Gallery.

Through paintings, ceramics, textiles and pigments specimens in “Making Colour,” an exhibition at London’s National Gallery that opens on June 18 and runs through Sept. 7, Ms. Campbell and co-curator Ashok Roy aim to show visitors how artists from 1300 to 1900 worked as quasi-scientists to evolve the range of pigments that became the base for modern art.

“We are so attached to this idea that artists work in just one form and don’t switch, but this contradicts that. Painters were open to finding any source,” says Ms. Campbell.

Here, a peek behind the development of three key colors: red, yellow and blue.

If the Virgin Mary had paid for even one of the portraits showing her in celestial blue robes, she would have needed the income of King David instead of that of her carpenter husband, Joseph. That’s because painters created the ultramarine pigment first used in the 13th century to portray her from the mineral ultramarine, extracted from lapis-lazuli stone and imported at sky-high expense only from Sar-e-Sang in modern-day Afghanistan. This convoluted import system often made the pigment costlier than gold.

Even 700 years ago, “contracts were extremely specific about the amount and quality of the ultramarine used because it was so expensive,” says Ms. Campbell. The color—and its associations with purity and divinity—became popular with wealthy women sitting for portraits, including the mother in Pierre Mignard’s 1691 “The Marquise de Seignelay and Two of Her Sons,” shown here. In the 16th century, painters thought they had found a cheaper, identical color in smalt, created from adding cobalt oxide to potash-rich glass that was crushed. But the bright blue turns gray in about a century when combined with oil paint. Those “gray” skies in Dutch landscapes were meant to be a sunny blue—a fact scholars only learned in the 1970s and 1980s and still unknown to most museum visitors.

Vermilion, a fire-engine red, is made by pulverizing cinnabar. It is one of the earliest pigments ever used in art, as evidenced by its use on the walls of Pompeii. A synthetic version was already available in eighth-century Islamic art. The color has remained popular for centuries and can be seen here in the 1896 painting “Combing the Hair” by Edgar Degas. Old Master painters used “red lake”—dyes created from plant and animal sources—to create glossy reds resembling shiny textiles. Later, painters turned to cochineal, created from crushing a Mexican scale insect.

Red paints are particularly prone to fading and have always had their chemical peculiarities. Pigment scientists are still trying to understand why, says curator Ms. Campbell. Saints and government officials once wearing perfectly respectable scarlet robes often appear clad in funky purple if the vermilion used for their robes was made with egg tempera. In Masaccio’s 1428-29 egg-tempera-on-poplar portrait “Saints Jerome and John the Baptist,” also in the London show, John erroneously appears a fan of pink clothes: The scarlet red-lake pigment mixed with white that Masaccio made for John’s robes has drastically faded.

All that glitters brightly is gold. That’s exactly why artists should use yellow paint instead of gold leaf to portray the golden halos, arrows and heavenly robes in Christian and mythic-figure scenes, argued Leon Battista Alberti in a 1435-6 manual on painting techniques.

The problem with gold leaf is that its shiny metal surface reflects the colors in the room where the painting is located—all too often making the surface appear anything but gold. So Pietro da Cortona mixed yellow paints to create the gold and orange textiles sported by St. Cecilia for this 1620-25 painting that’s in the London show.

Luckily for Alberti and subsequent painters, technology already available in the 1300s created lead-tin yellow, made by firing oxides of tin and yellow in furnaces of 800 degrees Celsius. Yellow also played well with others: It was mixed with azurite and verdigris pigments to create paints for foliage. Lead-tin yellow gave way to the chrome yellow used by J.M.W. Turner in the 1800s. Then innovation picked up speed as pigment makers created yellows from glazing agents for glass and ceramics—a process discovered by National Gallery researchers only in the past 30 years.