Why Dads need to take care of the kids more 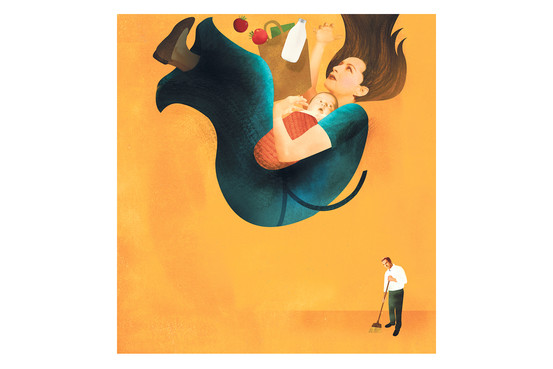 Several years ago, while observing a parenting group in Minnesota, I was struck by a confession one of the women made to her peers: She didn’t really care that her husband did the dishes after dinner. Sure, it was swell of him, and she had friends whose husbands did less. But what she really wanted, at that point in her day, was for her husband to volunteer to put the kids to bed. She would have been glad to sit in the kitchen on her own for a few minutes with the water running and her mind wandering. Another woman chimed in: “Totally. The dishes don’t talk back to you.”

According to the American Time Use Survey—which asks thousands of Americans annually to chronicle how they spend their days—men and women now work roughly the same number of hours a week (though men work more paid hours, and women more unpaid). Given this balanced ledger, one might guess that all would finally be quiet on the domestic front—that women would finally have stopped wondering how they, rather than their husbands, got suckered into such a heavy load. But they haven’t. The question is: Why?

Men and women now work roughly the same number of hours a week, but women are still carrying the heavy load when it comes to child care. Jennifer Senior, author of “All Joy and No Fun: The Paradox of Modern Parenthood,” discusses on the News Hub. Photo: Getty Images.

Part of the problem is that averages treat all data as if they’re the same and therefore combinable, which often results in a kind of absurdity. On average, human beings have half an Adam’s apple, but no one thinks to lump men and women together this way. Similarly, we should not assume that men and women’s working hours are the same in kind. The fact is, men and women experience their time very differently.

For starters, not all work is created equal. An hour spent on one kind of task is not necessarily the equivalent of an hour spent on another. Take child care, a task to which mothers devote far more hours than dads. It creates much more stress in women than other forms of housework. In “Alone Together” (2007), a comprehensive look at the state of American marriage, the authors found that if women believe child care is unevenly divided in their homes, this imbalance is much more likely to affect their marital happiness than a perceived imbalance in, say, vacuuming.

Or consider night duty. Sustained sleep deprivation, as we know, consigns people to their own special league of misery. But it’s generally mothers, rather than fathers, who are halfway down the loonytown freeway to hysterical exhaustion, at least in the early years of parenting. According to the American Time Use Survey, women in dual-earner couples are three times more likely to report interrupted sleep if they have a child under the age of 1, and stay-at-home mothers are six times as likely to get up with their children as are stay-at-home fathers.

Funny: I once sat on a panel with Adam Mansbach, the author of the best-selling parody “Go the F— to Sleep.” At one point in the discussion, he conceded that his partner put his child to bed most nights. He may have written a book about the tyranny of toddlers at bedtime, but in his house, it was mainly Mom’s problem.

Complicating matters, mothers assume a disproportionate number of time-sensitive domestic tasks, whether it’s getting their toddlers dressed for school or their 12-year-olds off to swim practice. Their daily routine is speckled with what sociologists Annette Lareau and Elliot Weininger call “pressure points,” or nonnegotiable demands that make their lives, as the authors put it, “more frenetic.”

These deadlines have unintended consequences. They force women to search for wormholes in the time-space continuum simply to accomplish all the things that they need to do. In 2011, the sociologists Shira Offer and Barbara Schneider found that mothers spend, on average, 10 extra hours a week multitasking than do fathers “and that these additional hours are mainly related to time spent on housework and child care.”

When fathers spend time at home, on the other hand, it reduces their odds of multitasking by over 30%. Which may explain why, a few years ago, researchers from UCLA found that a father in a room by himself was the “person-space configuration observed most frequently” in their close study of 32 families at home. It may also explain why many fathers manage to finish the Sunday paper while their wives do not—they’re not constantly getting up to refill bowls of Cheerios.

Being compelled to divide and subdivide your time doesn’t just compromise your productivity and lead to garden-variety discombobulation. It also creates a feeling of urgency—a sense that no matter how tranquil the moment, no matter how unpressured the circumstances, there’s always a pot somewhere that’s about to boil over.

“My husband says I cause some of the worry unnecessarily,” another Minnesota mother, who was part of the same parenting program, told me when I spent some time in her home.

It’s something that I hear a lot from parents. One of them—usually the mother—is more alive to the emotional undercurrents of the household. As a result, this more intuitive parent feels that the other parent—usually the father—is not doing his fair share, while the father feels that his wife is excessively emotional and wretchedly inefficient. But what really may be going on is that the couple is experiencing time differently, because each person is paying attention to different things.

It’s important to remember that fairness isn’t just about absolute equality. It’s about the perception of equality. Women may work fewer paid hours than men, but because they devote nearly twice as much time to family care (housework, child care, shopping), it doesn’t look to women like their husbands are sharing the load evenly when they’re all home together. It looks instead like their husbands are watching “SportsCenter.”

It’s hard to overstate how stressful these perceived imbalances can be. At one point, the UCLA researchers took saliva samples from most of the subjects of their study to measure levels of cortisol, the stress hormone. They found that while leisure time went a long way toward relaxing fathers, it did far less to subdue anxiety in mothers. So what, you may ask, did calm the mothers?

Simple: Seeing their husbands make a bigger effort to reduce the pandemonium in the house.

—Adapted from Ms. Senior’s new book, “All Joy and No Fun: The Paradox of Modern Parenthood,” published next week by HarperCollins.