Long dismissed as a waste of time, doodling is getting new respect.

Recent research in neuroscience, psychology and design shows that doodling can help people stay focused, grasp new concepts and retain information. A blank page also can serve as an extended playing field for the brain, allowing people to revise and improve on creative thoughts and ideas.

Doodles are spontaneous marks that can take many forms, from abstract patterns or designs to images of objects, landscapes, people or faces. Some people doodle by retracing words or letters, but doodling doesn’t include note-taking.

“It’s a thinking tool,” says Sunni Brown, an Austin, Texas, author of a new book, “The Doodle Revolution.” It can affect how we process information and solve problems, she says. 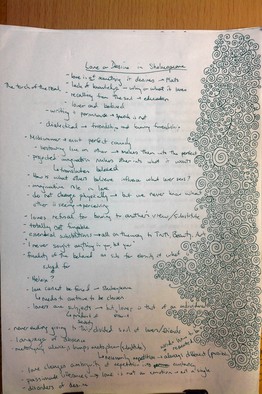 Doodling in meetings and lectures helps ease tension for Samantha Wilson, a high-school teacher and graduate student from Southborough, Mass. Drawing squiggly patterns that are “very vegetal, scrolling and organic,” with shaded blocks and spirals in red and blue pen on paper, also allays boredom, she says.

“It looks like I’m spacing out when I’m doodling, but I’m actually making my thoughts come together, solidifying my own ideas,” Ms. Wilson says. Doodling recently helped her come up with a theme for a paper in a graduate-school course she is taking, she says.

Scientists in the past thought doodles provided a window into the doodler’s psyche, but the idea isn’t supported by research, says a 2011 study in The Lancet, a medical journal.

Some researchers suspect doodling may help the brain remain active by engaging its “default networks”—regions that maintain a baseline of activity in the cerebral cortex when outside stimuli are absent, the Lancet study says. People who were encouraged to doodle while listening to a list of people’s names being read were able to remember 29% more of the information on a surprise quiz later, according to a 2009 study in Applied Cognitive Psychology. 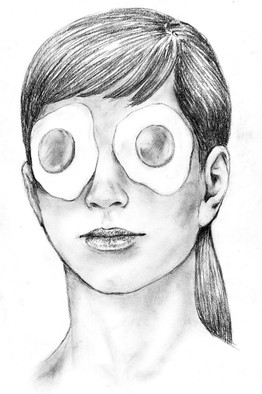 Jesse Prinz draws people’s heads to help himself pay attention during lectures and speeches at conferences he attends. The head usually has “something happening to it—an animal on top of it or something coming out of it,” says Dr. Prinz, a distinguished professor of philosophy at the City University of New York Graduate Center.

When Dr. Prinz returns to the doodle later, “I can reconstruct a lot of what I heard” in the lecture. He compares it to a post card: A traveler may forget specifics about a trip, but “if you look at that post card, a lot of things that aren’t depicted in it come back to you,” he says.

Ms. Brown, the author, says doodling provides an alternate route to learning for some people. Her professional work includes training company managers to translate ideas and concepts into sketches and drawings in order to spark ideas and improve communication. 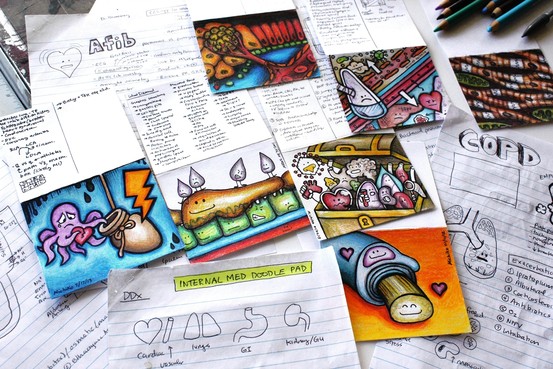 Michiko Maruyama, a medical-school student, says she writes down key words during class lectures and later draws “daily doodles” that bring together what she learned. Ms. Maruyama, who attends the University of British Columbia in Vancouver, says she fills gaps in her understanding while she draws images of gastric secretions, hernias and other subjects of study.

“It’s not until I doodle that I think about how everything comes together. I find out what I know and what I don’t know,” she says. When she stopped doodling for a week, her grades went down. 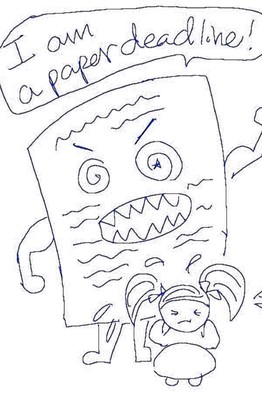 The appearance of a doodle can stimulate ideas for improvement, according to a 2014 study by Gabriela Goldschmidt, a professor emeritus of architecture at the Technion-Israel Institute of Technology in Haifa and a researcher on learning techniques of design. A doodle can spark a “dialog between the mind and the hand holding a pencil and the eyes that perceive the marks on paper,” the study says.

The study discussed an architecture student who became stalled in his efforts to design a new kindergarten and started a habitual doodle he found pleasurable—writing his signature over and over.

The student soon began to see between the letters of the doodle the outline of a layout for the kindergarten’s three activity spaces. He drew progressively larger versions that eventually became an architectural sketch, the study says.

A doodle also can express emotions too complex for words. Ten doodlers in a four-week study were equipped by researchers to share their sketches on social media, using digital pens and Bluetooth-equipped phones.

Many of the participants’ doodles expressed complex emotions they wouldn’t have shared via written posts or texts, according to the study, presented in 2011 at a Stockholm conference on human-computer interaction. 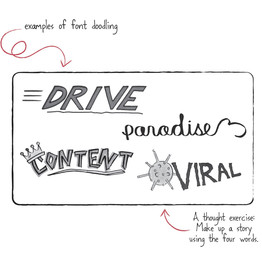 One 37-year-old teacher, the father of a newborn baby, drew a frazzled-looking brain to convey a feeling of being overwhelmed. A 27-year-old graduate student drew a towering obelisk looming over a childlike figure, to convey the pressure she felt over a deadline for a paper, according to the study, which was led by Lisa Cowan, who earned a Ph.D. in computer science at University of California San Diego and now works as a software developer in Mammoth Lakes, Calif.

The opportunity to doodle “changed the way people expressed their feelings,” says Nadir Weibel, a research assistant professor in computer science at UCSD and a co-author of the study. “Their pictures communicated more than just a text or a regular photo. They were more personal, more intimate.”

Doodling doesn’t work for all tasks. People who were asked to view and remember a collection of images struggled at the task if they were asked to doodle at the same time, according to a 2012 study published by the University of British Columbia. The likely reason: Doodlers’ visual-processing ability was split between two visual tasks, says the study’s author, Elaine Chan, a former psychology student at the university who is now a researcher at a Vancouver children’s hospital.

Put another way, when doodling and another task use the same cognitive pathways, “you have a traffic jam,” says Ms. Brown.