By
WILLARD SPIEGELMAN
November 19, 2011
Famous for Christopher Columbus, Renzo Piano and pesto, Genoa is not part of the Grand Tour for most tourists. This is too bad. It’s well worth a visit.

For centuries, Genoa was the archrival of Venice, Italy’s other major maritime republic. In the winding streets of the old town—a dense, dark maze descending to the harbor—you get a feeling for the dangers and pleasures of life in a port. On the straightaway above, you encounter the source of Genoa’s real power: money. And where there is money there is art.

In the 17th century there was plenty of money in Genoa, plus an entrenched nobility and self-promoting bankers. How did the Wall Street moguls of their day secure their immortality? Throughout Europe, from the Renaissance to the early 20th century, portraiture was one sign of arrival. And the compliant artists for hire included just about everyone from Raphael to John Singer Sargent. 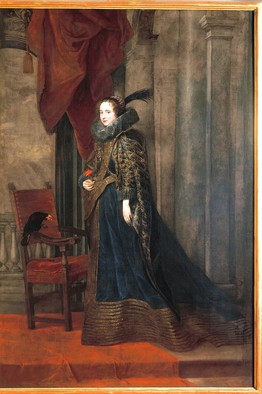 The Brignole-Sales were barely in their 20s when Van Dyck, himself only 28 at the time, produced these enormous portraits. Scala/Art Resource, NY

Anthony van Dyck (1599-1641) fits right in. Like his teacher Peter Paul Rubens, with whom he apprenticed in his native Antwerp, another mercantile city, he took Genoa as his base of operations as a young man, from 1621 to 1627. Here he perfected his portrait work, which he continued in the Low Countries and finally at the English court of Charles I in the 1630s.

Like many painters up through the 19th century, Van Dyck aimed for the big stuff—historical and religious scenes—but we value him equally for his portraits. For these, the Genoese bankers had an appetite and paid handsomely. According to one 18th century writer, he made 72 of them. Some of them hang on the walls of the stately Palazzo Rosso on the Via Garibaldi, formerly la Strada Nuova, which Rubens called the world’s most beautiful street, lined with the homes of the great Genoese families. Appropriately, most of these palazzi today house banks.

Van Dyck’s portraits helped to ennoble many of the plutocrats. Few are more striking than the 1627 pictures of Anton Giulio Brignole-Sale and his wife, Paolina Adorno Brignole-Sale. Talk about putting the cart before the horse: The pictures preceded the structure that houses them. The couple’s sons built the Palazzo Rosso in the 1670s, a century after other dwellings had gone up on the Strada Nuova. In 1874, Maria Brignole-Sale De Ferrari, the Duchess of Galliera, gave the palazzo and its collections to the city of Genoa.

We think of “Old Masters” as stuffy and mature. In 1627 Van Dyck, a prodigy if there ever was one, and his subjects were barely adults. Today, the young couple—22 and 20 when painted—hang cater-cornered on two walls of a high-ceilinged salon, otherwise empty except for a small Van Dyck picture of the head of Christ. The portraits are enormous, more than nine feet tall and six feet wide. At eye level a viewer comes up to the subjects’ legs or, in the case of Anton Giulio, to his horse’s legs. 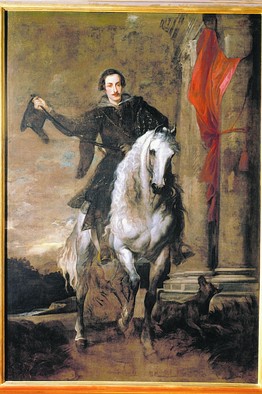 The figures are hard to see for another reason: Light pours in from floor-to-ceiling windows. At 10 a.m., the barely visible pictures seemed dark and muddy, less clear than a postcard reproduction. I stared, from every angle. After lunch I returned. The museum was empty; I pulled up a chair and gazed again, uninterrupted, for a full hour. Because the sun had moved, the young couple came into glorious focus at 3 p.m. Later they would become even more sumptuous. Time’s passage helped. Colors began to vibrate and glow.

What a pair they make. Paolina, lavishly brocaded, displays the feminine emblems of the citizen-nobility’s economic power. Golden embroidery plaits the shoulders, back and sleeves of her indigo gown, and 13 matching stripes shimmer above its bottom hem. (We know that her clothes cost more than her portrait.)

The grandeur of her setting matches that of the room in which the paintings hang, with the same red carpeting on both the real and the pictured floor. A piece of crimson fabric cascades above and behind her, complementing the rose she holds in her elegant, long, tapered fingers. Her face is serene, her lips are red and her cheeks rouged. Perched on a red chair, a tiny parrot, also flecked with red, reminds us of human vanity; the rose, fully opened, symbolizes the inevitable decay of beauty.

The most important symbolic detail in Anton Giulio’s portrait is his horse. Van Dyck has depicted the youth in a courtly equestrian pose previously reserved for sovereigns and princes. Brignole-Sale officially made it into the Genovese aristocracy in 1626. Here, he seems to be growing into his maturity and his station. Whereas his gently smiling, self-contained wife inhabits a magnificent domestic setting, he is outdoors, perhaps a little less self-confident, but learning to assert himself.

The faces occupy roughly the same space in both paintings. Husband and wife are delicately, mysteriously impassive. In 1845, Gustave Flaubert called Anton a “grave figure, pale, aristocratic, sweet and sad.” There is something a little nervous about him. Even in his seat he seems off center. He raises his arm, bearing a flag, in a cordial, welcoming salute; his body tilts to his right, as the horse balances him by tilting to its left. And that steed! Van Dyck’s brushwork is rapid, especially for the horse’s glazed whiteness. The horse, no mere appendage but an integral part of a composite figure, has its own brilliance, with its muscled chest, cascading locks and long face.

Both pictures project a baroque theatricality. Where has Van Dyck stationed his subjects? On the right side, each picture has large, mottled Corinthian columns, belonging to no plausible building, which ascend well above the frame. In Paolina’s portrait, useless billowing drapery on the balcony doorframe opens onto a barely discernible vista behind it. Her husband is riding in from somewhere. A stormy landscape recedes into the background. The columns here, also ornamented with red fabric, suggest a homecoming. In fact, the Brignole-Sales live in an imaginary world, made possible by the lucky combination of a youthful couple’s wealth and taste, and the service of a young Old Master.

—Mr. Spiegelman, the Hughes Professor of English at Southern Methodist University, writes about art for the Journal.