How to Deal With Other People’s Rude Behavior 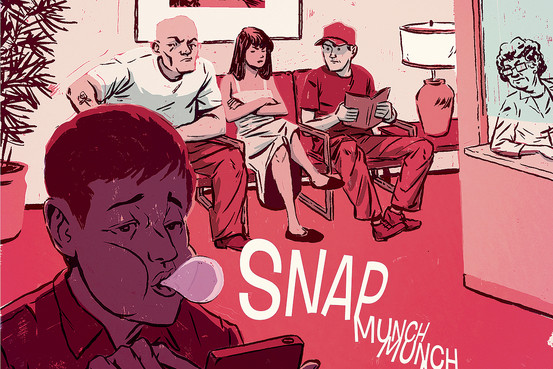 A noisy gum-chewer isn’t thinking of how the behavior affects other people around him, says Michael Cunningham, professor of communication at the University of Louisville. Gary Musgrave

I have been staying with my parents recently, while my house is being renovated. I have also been breaking out in hives.

They appear in the evening, soon after my dad starts clearing his throat over and over while reading in his study. I start to itch furiously when my mom, every half-hour or so, slowly opens the door to the room where I am writing, peers in and cheerfully chirps, “How’s it going?”

I have wonderful parents, and I love them, but after spending last weekend away from them—with zero hives!—I had a troubling thought: Am I allergic to them?

Experts use the term “social allergens” to describe behaviors or habits that drive others nuts. Some of these actions begin to annoy us soon after we meet someone. Others get to us slowly and surely over time. 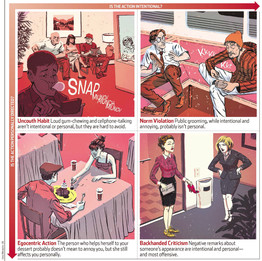 Imagine a heehaw laugher. A knuckle cracker. A braggart who always tries to one-up you. A person who thinks loud belching is a compliment to the chef.

As with a lot of allergies, it’s the repetition that gets to us. “The first time you are seated next to a co-worker who is loudly snapping bubble gum, you don’t care,” says Michael Cunningham, a psychologist and professor of communication at the University of Louisville. “After three weeks, you are praying they’ll choke on it.”

According to Dr. Cunningham, who has studied the phenomenon for more than 15 years, social allergens can be grouped into four main types, depending on whether the behavior is intentional or not, and whether directed personally at an individual or not.

The first grouping is uncouth habits. They are unintentional and they aren’t directed personally. They include noisily chewing gum or talking loudly into a phone in a crowded public space. “The person isn’t really thinking of you, even though the behavior has implications for you,” Dr. Cunningham says.

The second category is egocentric actions, he says. These behaviors aren’t necessarily intentional, but they are directed personally at you. There’s the friend who keeps you on the phone for 45 minutes after you said you can only talk for five, or the family member who never orders dessert at a restaurant but eats all of yours (you know who you are). This person still isn’t thinking about you, but the behavior affects you specifically.

The third category, norm violations, encompasses offensive behaviors that are intentional but impersonal. Examples include smoking right outside the front door, talking in a theater during the show or texting while driving.

The fourth, and most irritating, social-allergen group includes actions that are both intentional and directed personally, Dr. Cunningham says. It may be an imperious command (“Bring me some coffee, will you?”) instead of a request for a favor. Often, it is a backhanded complaint or criticism: “Are you really going to eat that?” or “You bought a car? I thought you were saving for college.” The person may not have meant to make you feel bad, but you do.

Spouses, co-workers and other people we see all the time are prime sources of our social allergies. Remember, repetition is the spur. There tend to be more social allergens at work, because our relationships there are involuntary, Dr. Cunningham says.

And in contrast to friendships, we get less out of work relationships, so there isn’t as much protective buffering. “You can forgive your friends more easily because they are nice or gave you a great birthday present,” Dr. Cunningham says.

In romantic relationships, social allergens typically appear after three to six months, Dr. Cunningham says. Much depends on how much time the couple spends together and how quickly they form a commitment.

It is part of the unfortunate process experts call “de-romanticism.” At first, both parties are on their best behavior. But once it’s clear the relationship will continue, people relax. “They start showing their more thoughtless, pushy and deviant behaviors,” Dr. Cunningham says.

From the start of their marriage, Gail Paul and Robert Rebholz never bothered to hide their annoying habits from each other. After 41 years of marriage, Mr. Rebholz hates it when his wife tosses a paper towel on the floor to clean up a spill—and leaves it there for the next one. Ms. Paul gets irritated by the way her husband leaves the kitchen cabinets open after emptying the dishwasher.

They used to fight over these things, they say. But time and some therapy taught them to let the little things go. “If you really look at each other’s foibles, they’re funny,” says Ms. Paul, who is 68 and co-owns a promotional-products business in Woburn, Mass., with Mr. Rebholz. “We are all peculiar folks in one way or another.”

Certain variables can make social allergens worse. How often does the person repeat the behavior? Have you had a conversation about it and asked him or her to adjust? Did the person try to stop, or is he or she incapable of doing so?

When they persist, the allergy gets worse, and the whole thing eventually can start to symbolize something larger that is wrong in the relationship.

It’s one thing if your husband is messy and leaves his smelly socks on the kitchen floor after jogging. If the socks come to stand for how uncared-for, unheard and unloved you feel, it’s something else completely.

When allergens take on serious, symbolic overtones, it is often a sign that there aren’t enough positive things happening in the relationship to buffer the negative. Often, professional help is required.

To control your reactions to minor social allergens, start by cutting other people some slack. It is helpful to remember that we all do things that are annoying to others.

You can try to avoid the person. This isn’t always easy. On the other hand, many people see their families only on holidays.

You can talk to the person—gently!—about the behavior. If you decide to do this, Dr. Cunningham suggests practicing in advance with a third party to get advice on how to frame the discussion. A helpful opening line is, “I really value you and don’t mean to make you feel embarrassed, but this is something that is affecting me.”

In the end, the best approach boils down to tried-and-true relationship advice: Change your own behavior. Don’t let yourself become irritated.

This will be easier to do if you choose to see the other person’s irritating behavior as uncontrollable.

Maybe your husband bites his nails because he is stressed at work. Or your wife might be habitually late because she is swamped chauffeuring the family around. Maybe your best friend interrupts you repeatedly because she is eager and impulsive. “That is just the way they are,” says Dr. Cunningham. “You can decide to let it go.”

Michael Allen, a 44-year-old writer from Clearwater, Fla., turned his social allergy into a running joke. For years, he says, his mother would call and say she just wanted to hear the sound of his voice—and then talk nonstop for 20 minutes.

One day, Mr. Allen interrupted her and asked, “Mom, don’t you think if you called to hear my voice that you’d at least let me talk a little?”

Mr. Allen’s mother burst out laughing. She still calls and talks. But when she is done, she asks: “Is there anything you’d like to say before I hang up?” “It’s always funny,” Mr. Allen says.

As for me? I’ve started to listen to my iPod more around my parents’ house. And I did take note: The last time my mom peeked into the guest room, it was to bring me cookies and milk.