Let your child be the guide in Paris 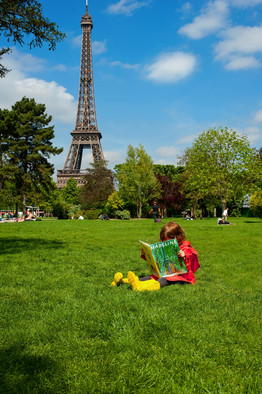 THE FIRST remarkable sight we caught in Paris was our own 4-year-old daughter. Standing on a sidewalk in the Marais, she looked around, hands on hips, and said: “I think I’ve been here.”

She hadn’t—we monitor her play dates more carefully than that—but it was a delight to realize what made her think so: books.

It’s no accident that a passport is a book, and no question that books are passports. Especially Paris books, and especially in our house. Whenever Ludwig Bemelmans’s “12 little girls in two straight lines”—including “the smallest one…Madeline”—embark on another walk through the city, we tag along. When Albert Lamorisse’s “Red Balloon” takes flight, we leap after the string. And when young Hugo nervously approaches the little toy shop in “The Invention of Hugo Cabret,” we take a deep breath and follow him.

If you’re packing for Paris, here’s advice no guidebook will give you: Bring a 4-year-old. And a 9- and 11-year-old, if you have them. Stuff their suitcases not with electronics but books—children’s books with Paris at their core—and once you land, prepare to do something really counterintuitive: Let your kids lead you around the French capital. 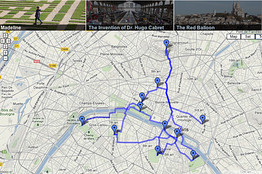 Click the image above to view maps, created by writer Liam Callanan, that highlight locations from three classic children’s books set in Paris.

When my wife and I did just that for a week this spring, we not only survived, but had the most fun we’ve ever experienced in Europe. We saw things we’d never have otherwise: A tiny toy shop full of surprises so startling my daughters gasped. A restaurant so very French we were the only foreigners dining. And a bookstore where pondering a purchase caused us to rethink our lives.

We started with “Madeline,” because Mr. Bemelmans not only takes his book’s 12 little girls on a comprehensive Parisian tour, but also shows readers how to tour: Stick together, ignore the weather, run and play whenever possible and stay out of the metro.

It’s not that the author had anything against the subway, just that his vibrant books made me realize the obvious—it’s hard to see Paris from underground. Less obvious was that the dozen little girls don’t walk a straight line through Paris. Rather, we discovered, they embark on a wandering expedition that totals almost 16 miles. Perhaps Mr. Bemelmans took liberties; we took the bus. 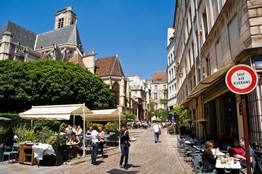 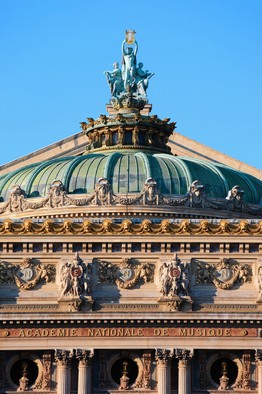 The chartreuse, double-decker L’OpenTour buses, which offer hop-on/hop-off service along four circuits, can seem a little gauche. But our daughters helped us get over our inner American snobs (who can be much sniffier than any Parisian about what is or isn’t vraiment Français). To them, the buses were amazing. There was a downstairs and an upstairs—with no roof. There were audio tour headphone jacks at every seat, and the headphones, also chartreuse, were free. 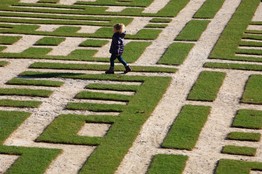 Best of all, the bus helped us untangle Madeline’s twisting route. We started at the top of Paris, at the Basilique du Sacré-Cœur in Montmartre. We had to make the final climb to the hilltop church on our own, but it was early in the day and steep stairs and cobblestones were still exciting. Returning to the bus, we rolled back into central Paris, hopped off at the Palais Garnier in the ninth arrondissement and walked a few blocks down to the Place Vendôme, looking at the jewelry stores and for the jewelry thief Madeline spies there. The Jardin des Tuileries, just a little farther south, had all the birds and gardeners Bemelmans promised, plus a playground. From there, we rode to Notre-Dame cathedral, which we explored before switching to even more exotic transport—the Batobus, a boat that not only took us east to the Jardin des Plantes botanic gardens and a zoo (whose tiger Madeline tells, “pooh-pooh”) but also beneath the Pont Neuf, the bridge Madeline teeters atop (in the first book) and falls from (in the second). Then we did a crepe-fortified march southwest to the Jardin du Luxembourg before catching a last bus northwest to Les Invalides and, finally, the Eiffel Tower.

Along the way, our delight increased each time our daughters took out books and compared what they’d read with what they were seeing. Was that the—yes it was! And over there, did she—? She did, and so did we. Madeline’s Paris looked like our Paris. Some 70 years on, little had changed—we found every detail of every illustration.

“The most famous landmark in Madeline’s books, her ‘old house…covered with vines,’ is fictional. But that inspired rather than frustrated us: Could this be her house? Could that?”

Except one. The most famous landmark in Madeline’s books, her “old house…covered with vines,” is fictional. But that inspired rather than frustrated us: Could this be her house? Could that? Though a later Bemelmans book, “Madeline and the Bad Hat,” suggests the girls live next door to the Spanish ambassador in the eighth arrondissement, none of the buildings near there suited. We settled instead on a tidy, ivy-trimmed edifice in the third arrondissement, the Hôtel Duret-de-Chevry at 8 rue du Parc Royal. So what if it now houses the German Historical Institute? There’s a beautiful (royal) park and playground across the street and good crepes 50 meters west. 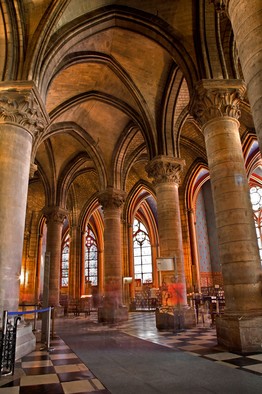 Crepes again? We knew what Napoleon knew: An army marches on its stomach.

Several nights, we ate in our apartment—inspired by Madeline who, bless her, doesn’t dine out—but one night our girls begged to go to Hippopotamus, a kid-friendly French chain. Crayons at your place when you sit? Oui. Tacky décor? Non. Great food, a window table, the check when I wanted it and the only waiter in Paris who answered my stumbling French in kind, rather than switching to stumbling-but-condescending English? Big oui. 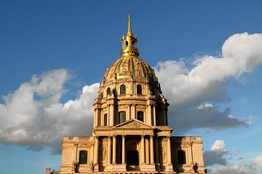 To my surprise, though, the answer was often “non” when my 11-year-old and I tried tracing the path of “The Red Balloon,” a classic short film from 1956 that won an Academy Award and Palme d’Or before becoming an equally beloved book. The story follows a boy and his balloon through hilly Ménilmontant, a (still) gritty neighborhood east of Montmarte. We found Notre-Dame de la Croix de Ménilmontant, the church where Pascal and his balloon attend (and get ejected from) Mass, and his apartment building, which features a fresh coat of paint but the exact same window grilles. We thought the photos in our book made the case, but three policewomen we met weren’t so sure. Then a woman pushing a stroller happened upon us, saw the book and the building, and glanced up at the sky. “I love that book,” she sighed.

The Lowdown: Paris With Kids

Staying There: If you have kids, an apartment with a kitchen and washer-dryer is your best lodging option in Paris. We rented ours from Paris by Heart (parisbyheart.com).

Eating There: Kid-friendly Hippopotamus restaurants are all over Paris; my girls voted the chocolate mousse at the Bastille location (1 Boulevard Beaumarchais,hippopotamus.fr) the best in town. For inexpensive evenings at home, we opted for rotisserie chicken, getting ours from Boucherie Becquerel (113 Rue St.-Antoine, 01-48-87-89-38).

Shopping There: Tiny toy store Tumbleweed has many more delights than mentioned here—among other things, spinning tops that switch poles (19 Rue de Turenne, tumbleweedparis.com). The Red Wheelbarrow bookstore is indeed for sale, but so are plenty of wonderful books (22 Rue St. Paul, 01-48-04-75-08).

Getting Around: Families of four or more should take a taxi to/from the airport; the cost will be about as much as the train, and the likelihood much lower that you’ll separate from your luggage and children. There are several bus tour companies in central Paris, but the chartreuse buses from Paris L’OpenTour were plentiful, and the recorded audio tour informative. There are two English channels, one for adults and one for kids (parislopentour.com). Batobus (batobus.com) is a hop-on/hop-off service that plies the Seine. My wife said it was the only way she would allow her daughters to be in the water beneath a bridge in Paris—unlike Madeline, who famously plummets off the Pont Neuf.

We loved Ménilmontant, too—the barren hilltops from the book have been replaced with the green and almost vertical Parc de Belleville, which offers better panoramic views of Paris than Sacré-Cœur. In the film, Pascal rides the bus down into Paris, and we did, too—the 96 still takes the same route, winding through the Marais, and into our next book.

Author Brian Selznick has called “The Red Balloon” his “first trip to Paris.” With his 2007 illustrated novel, “The Invention of Hugo Cabret,” Mr. Selznick brought a new generation of kids back with him. 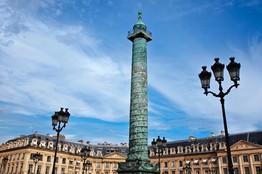 The book largely takes place in a historic train station, Gare Montparnasse, which was replaced in 1969 with a more modern depot and a much-reviled black tower. But as with Madeline’s house, this made our search for the book’s elements an enjoyable adventure. The massive station clock Hugo peers through? We found it on the fifth floor of the Musée d’Orsay (turn left after the Renoirs). The vast station, we decided, is not unlike the current Gare du Nord. Hugo’s film research can now be done at the Cinémathèque Française museum and library. The book’s little toy shop, meanwhile, is hidden among some clothing stores in the fourth arrondissement. 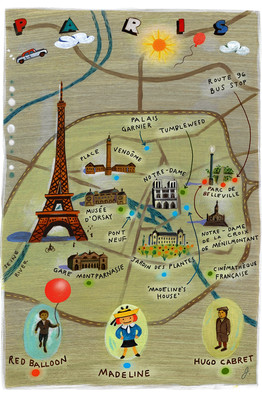 Lynn Rovida’s 161-square-foot store, Tumbleweed, is not exactly a toy shop but a “boutique d’artisanat d’art ludique,” which my girls determined was a long way of saying “wow.” Ms. Rovida left them agog with her demonstration of a set of tiny wooden puzzle boxes. Only by following a secret series of as many as 35 steps—which may involve spinning, sliding secret panels or a delicate swoop into the air—will the marquetry boxes open.

We bought one (seven steps, and Ms. Rovida showed us how, though she usually gives customers two months to solve it on their own), but the Paris purchase that haunts us most is one we didn’t make. We were at the Red Wheelbarrow, an English-language bookshop on the Right Bank. My daughters were burrowed into a cozy corner with a chair, lamp and children’s books piled high on all sides. “Can we buy it?” they asked.

I thought they were talking about a book, but the shopkeeper, Penelope Fletcher, explained: The store was for sale. Family reasons. Ms. Fletcher smiled at my daughters; she has a daughter, too. The store, she said, was long part of her daughter’s life.

My girls looked up at me. We’d done Paris by the book, but buy the bookstore? Let’s just say this volume ends, “To be continued…” 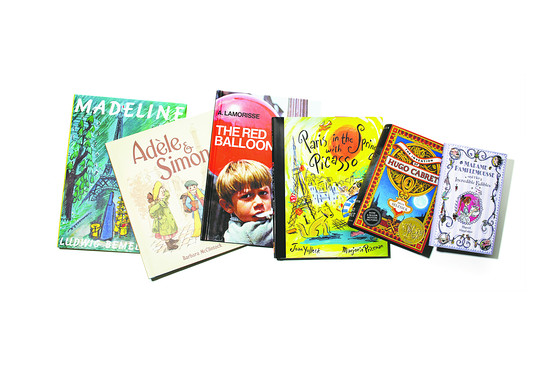 “Madeline,” Ludwig Bemelmans (1939). There are many Madeline books, including new editions from Mr. Bemelmans’s grandson, but start where Madeline herself does—with the original. Age 3 and up.

“Adèle & Simon,” Barbara McClintock (2006). Little Simon loses just about everything on the way home from school, to the exasperation of his sister but the delight of readers, who will find searching for objects in Ms. McClintock’s sketches—with homages to Daumier, Atget and Vuillard—a real challenge. Age 4 and up.

“The Red Balloon,” Albert Lamorisse (1956). The 34-minute film won both an Academy Award and the Palme d’Or. The book, a collection of film stills accompanied by a spare narrative, is almost its equal. Age 6 and up.

“Paris in the Spring with Picasso,” Joan Yolleck and Marjorie Priceman (2010). This picture book introduces kids to Picasso, Gertrude Stein, Alice B. Toklas and Max Jacob. It sounds heavy but reads beautifully, with gouache and ink applied with dash. Age 4 and up.

“The Invention of Hugo Cabret,” Brian Selznick (2007). Part picture book, part novel, altogether magic. Inspired by the true story of moviemaker and inventor Georges Méliès, the book is engrossing and beautifully illustrated. Consider rolling luggage if you take it to Paris, as it’s a hefty 500-plus pages. Age 9 and up.

“Madame Pamplemousse and Her Incredible Edibles,” Rupert Kingfisher and Sue Hellard (2008). No trip to Paris is complete without a discussion of food. In this wise, funny book for intermediate readers, good taste triumphs, as Madame Pamplemousse’s edibles trump those of the snooty Monsieur Lard. Age 8 and up.