Children still in kindergarten or even younger form cliques and intentionally exclude others, say psychologists and educators who are increasingly noticing the behavior and taking steps to curb it.

Special programs are popping up in elementary schools to teach empathy as a means of stemming relational aggression, a psychological term to describe using the threat of removing friendship as a tactical weapon. Children also are being guided in ways to stand up for themselves, and to help others, in instances of social exclusion. Though both boys and girls exhibit relational aggression, it is thought to be more common among girls because they are generally more socially developed and verbal than boys.

“I think it’s remarkable that we’re seeing this at younger and younger ages,” said Laura Barbour, a counselor at Stafford Primary School in West Linn, Ore., who has worked in elementary schools for 24 years. “Kids forget about scuffles on the playground but they don’t forget about unkind words or being left out.” 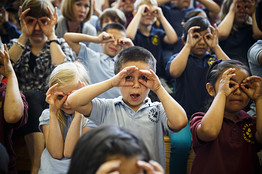 In a program teaching empathy, students at Sue Buel Elementary School in McMinnville, Ore., were asked to put on their “bystander glasses” to encourage them to act when they witness others being physically or emotionally bullied. Toni Greaves for The Wall Street Journal 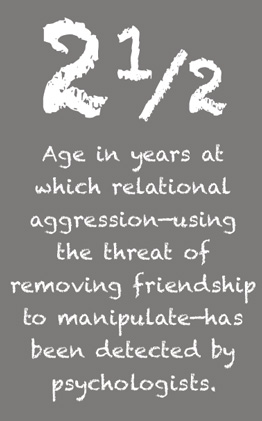 Generally thought of as a middle-school phenomenon, relational aggression is less explored among young children. Experts say it often goes under the radar because it is harder to detect than physical aggression. The behavior is similar to verbal aggression but revolves around threatening the removal of a friendship. Examples include coercing other children not to play with someone else or threatening not to invite them to your birthday party if they don’t do what you want them to do.

“It actually works so well because of the child’s limited cognitive abilities,” said Jamie Ostrov, an associate professor of psychology at the University at Buffalo, State University of New York. Dr. Ostrov, who has conducted observational studies of relational aggression in 3-to-5-year-olds, said he has detected signs of the behavior in children as young as 2½ years. It isn’t clear why some children are more inclined to relational aggression than others. There is evidence that children can learn these behaviors by observing parents or older siblings, as well as from media, Dr. Ostrov said.

Unlike physical aggression, relational aggression increases with age, often peaking in middle school, said Charisse Nixon, chair of the psychology department at Penn State Erie. Some research indicates that girls are more affected than boys by relational aggression as they perceive it as more damaging to their social relationships, she said.

Dr. Nixon’s research has found that an average of 50% of children and adolescents—grades five through 12—have experienced relational aggression at least monthly. About 7% of children report experiencing physical aggression on a daily or weekly basis.

Experts say children engaging in high levels of relational aggression can have other conduct problems. It is also linked to health problems, such as depression and anxiety, Dr. Nixon said. 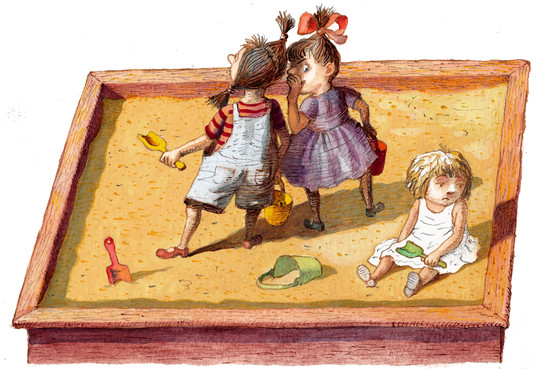 Laurel Klaassen, a counselor at Sibley-Ocheyedan Elementary School in Sibley, Iowa, says she has seen first-grade girls make a list of who can play with whom at recess.

“They’re already thinking at that age about being popular, being the queen of the classroom, or the queen of the playground and vying for that position,” said Ms. Klaassen. With boys, episodes of relational aggression seem to roll right off them, she said. “I’ve had girls that have come in and said to me, ‘I remember back in kindergarten when so-and-so did this to me.’ ”

Mark Barnett, a developmental psychologist at Kansas State University, says affective empathy, or vicariously experiencing the emotions of someone else, is what needs to be encouraged to reduce relational-aggressive behavior. If a child does something negative to someone, the parent should say, “Imagine how it would feel if someone did that to you?” Dr. Barnett also recommends parents and teachers talk about feelings of characters during story time. They also need to model empathetic behavior.

Steph Jensen, a presenter at “Mean Girls” seminars run by training group AccuTrain, of Virginia Beach, Va., said she has been seeing more participation from elementary-school teachers and counselors. And Simone Marean, executive director of the Girls Leadership Institute, a nonprofit based in Oakland, Calif., said the group started a program aimed at kindergarten and first-grade children addressing relational aggression three years ago in response to parent demand.

Tracy Ludwig, who led last week’s empathy program, showed the children how they can reach out in safe ways to help targets of bullying. Toni Greaves for The Wall Street Journal

Trudy Ludwig, a Portland, Ore.-based author of books on children’s social and emotional learning who does presentations at schools, said she engages in role playing with the children to teach them both empathy and how to stand up for themselves. Last week she read one of her books, “The Invisible Boy,” to kindergarten, first- and second-grade students at Sue Buel Elementary School in McMinnville, Ore., in a program funded by the PTA.

The children were invited to insult Ms. Ludwig, as she showed them how to respond in a dignified and nonviolent way. In another role-play game, she demonstrated how to be a good bystander by comforting children who are bullied or including them in a group activity.

“A lot of kids don’t understand that manipulating friendships and relationships is bullying and that’s what I’m trying to educate the kids and the staff about,” Ms. Ludwig said.

When Ms. Ludwig asks students whether they find relational or physical aggression more hurtful, over 90% of the children will raise their hands for relational aggression, she said. “They’d rather be punched in the stomach,” she said.

Experts say parent involvement is important. A 2012 study in the journal Early Child Development and Care found that parents of preschoolers believe children should seek out adult assistance for physical aggression but not relational aggression, which they think children should work out on their own.

Samantha Parent Walravens, a mother of four children in Tiburon, Calif., said she was alarmed one day in January when her daughter Genevieve, a kindergartner, woke up crying. The girl complained of a stomach ache and didn’t want to go to school because some girls on the playground were being mean and wouldn’t let her play with them.

“I was shocked,” said Ms. Walravens, a 46-year-old writer. “You think about the mean-girl stuff going on in middle school. But in kindergarten?”

Ms. Walravens found out from the teacher that Genevieve was in a best-friends triangle with two other girls, which sometimes led to hurt feelings. The teacher “nipped it in the bud,” including telling Ms. Walravens to encourage her daughter to have other friends.

“I’m trying to teach her empathy,” Ms. Walravens said. “How did you feel when those little girls didn’t allow you to play with them? What do you do if you see someone who’s feeling sad on the playground? I always tell her you can go to me or the teacher and we will help you work it out. A lot of the stuff they can’t work out on their own.” 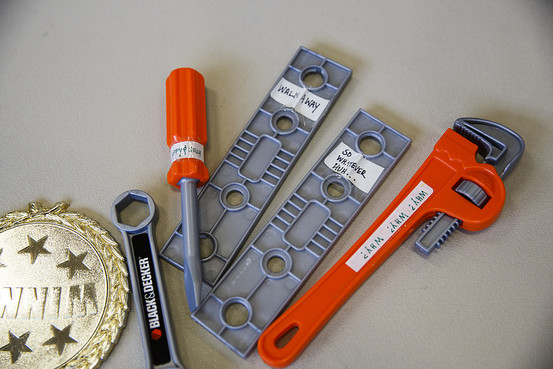 Write to Sumathi Reddy at sumathi.reddy@wsj.com