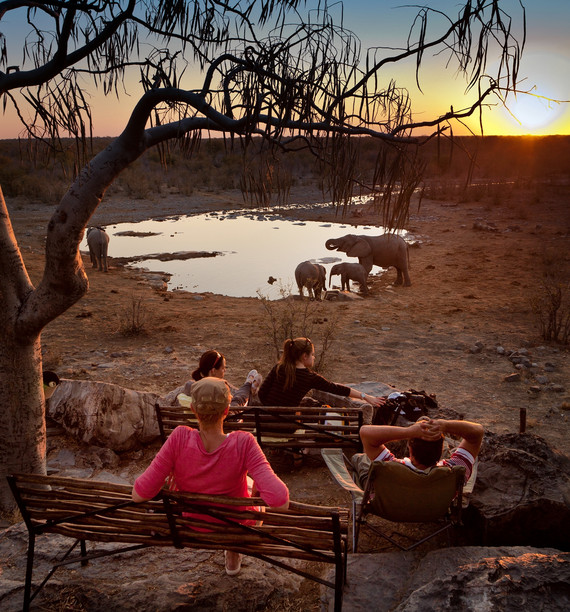 MANE EVENT | Elephants at a watering hole at Halali camp in Etosha. Remy Scalza for The Wall Street Journal

ROADS IN ETOSHA National Park, a wildlife sanctuary in northern Namibia bigger than the state of New Jersey, are almost perfectly flat. There’s little in the way of traffic. Still, it’s not a great idea to read a map at the wheel.

My wife hollered, “Stop!” By the time I hit the brakes and our little rented Volkswagen skidded to a halt, we were 10 feet from a pair of enormous knees. The African bush elephant they belonged to flared his ears and turned one massive eye my way, clearly—and justifiably—annoyed.

The African safari of glossy-brochure fame—luxury lodges, expert guides, the whole Lion King menagerie hamming it up for photos—represents the trip of a lifetime to many travelers. It generally carries a price tag to match that status.

I went looking for something different, and easier on the bank account. I found it in Etosha. 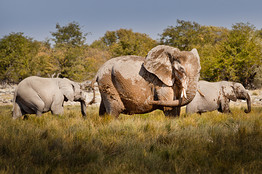 The park sits in the arid northeastern corner of Namibia, a country whose features include parched plains and plateaus, jagged mountains and 100-story red sand dunes that unfold to the Atlantic Coast. Most of its 2.3 million citizens still live in small, tribal villages. Namibia has neither the traditional safari cred of neighboring South Africa nor anywhere near the tourist volume.

But Namibia is also one of Africa’s success stories in terms of stability, infrastructure and conservation. Since the country won its independence from South Africa in 1990, it has set aside nearly half of all its land as protected. Animals once threatened by poaching and habitat loss—including elephants, black rhinos and lions—have reappeared in record numbers. 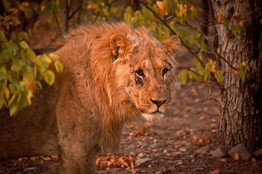 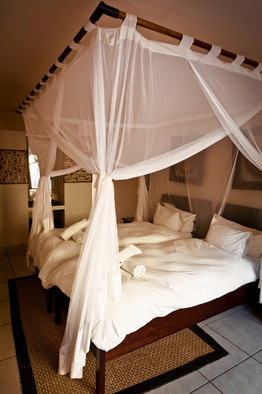 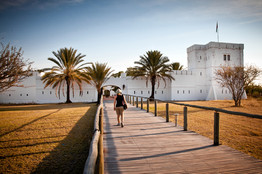 Namutoni, once a colonial fort Remy Scalza for The Wall Street Journal

Nowhere in Namibia is this profusion of wildlife more accessible than in Etosha, which is uniquely set up for independent (i.e., budget-minded) travelers. Its gravel roads are navigable with compact rental cars—no four-wheel drives required. State-run lodges inside the park offer comfortable accommodation at accessible prices (often ridiculously so). Meanwhile, wildlife clusters around more than 30 roadside watering holes, so anyone with a decent pair of binoculars and a $5 road map can track down the better part of the Big Five without a guide.

It does help to have a sense of adventure. At the main southern entrance to the park, a guard in a solitary hut took me through the safety briefing. “You must remain in the car at all times when on the roads,” she said, repeatedly. Considering the thousands of apex carnivores and multi-ton pachyderms roaming inside Etosha, I wasn’t inclined to argue.

Etosha means “great white place” in the language of one of its original inhabitants, Namibia’s Ovambo people. Its central feature is an enormous salt pan, which looks like an ocean that shimmers with heat waves instead of water. All kinds of megafauna come to the fringes to lick salt—lions, rhinos, giraffes, elephants, thundering herds of zebra and antelope. Because vegetation is sparse, even safari novices can spot normally reclusive animals.

Ten miles into the park, however, all we had seen were a few gangly springbok, little gazelles hardly more exotic than your average deer. To find out where the marquee predators were hiding, I made a quick detour to park headquarters, located in Okaukuejo camp, one of several gated rest compounds inside Etosha.

“Check the sightings book,” the receptionist said, barely looking up as she pointed to a tattered notebook near the door. I leafed through the equivalent of a safari cheat sheet, a detailed record of sightings by fellow travelers. The latest tip was less than an hour old: four elephants bathing at a water hole a few miles away.

When we rolled up a few minutes later, they were still knee-deep in the water, spraying and splashing, pulling long drafts from the pond with their trunks then blasting each other. A few dozen zebras waited in the wings, while a giraffe cautiously skirted the water’s edge. We were so close, I had to take the zoom lens off my camera to fit the animals in the frame.

Camps inside Etosha close their gates at sunset, which creeps up fast when you’re dashing from water hole to water hole. After a day on the road, we hustled to beat the sinking sun to Halali camp, our stop for the night, following a cloud of dust whipped up by other tardy drivers.

Operated by the Namibian government, Etosha’s camps generally don’t offer the private-plunge-pool luxury of other safari destinations. (The exception, Onkoshi camp, does not serve self-drive travelers.) But the lodging is far from bare-bones. In fact, the term “camp” is rather misleading.

Accommodation ranges from comfortable double rooms in low-slung lodges to private thatched-roof chalets perched above water holes. Camp restaurants serve rustic but exceedingly fresh food, with menus highlighting some of the same (non-endangered) sort of game seen in the park. Prices start at less than $75 a person per night—a 10th of what some of the private lodges outside the park charge.

“ ‘You must remain in the car at all times,’ the guard said, repeatedly. ”

Inside Halali, families gathered around campers; there were tidy bungalows and even a few bush chalets on a hillside. As safari camps go, it was more Holiday Inn than Hilton. But the rooms were immaculate, with hot water and air conditioning, and the dinner buffet was jammed with the kind of exotic meats—oryx, springbok, kudu and ostrich—adventurous eaters swoon over in big cities.

Not to mention the view, which was hard to beat. Before the light faded completely, we climbed to a protected ridge above a water hole. Below, two elephants, a mother and a very young calf, were drinking, their profiles silhouetted by an extravagantly red sky. I pulled a couple bottles of local Windhoek Lager from my backpack—not quite the classic safari sundowner of gin and tonic, but close enough. 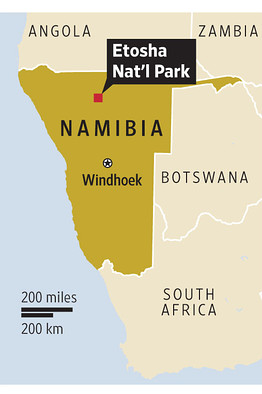 Getting There: International flights land at Hosea Kutako International Airport outside Namibia’s capital, Windhoek. DIY travelers should rent a car there for the five-hour drive north to Etosha National Park’s Anderson Gate. Admission for foreigners is $80 NAD (about $8) a day for adults.

Staying There: Comfortable accommodation is available inside the park at a network of state-run camps (from around $100 per person per night for two-person bush chalets, etoshanationalpark.co.za ). There are higher-end lodging options just outside the park gates, including Ongava Lodge, which has 13 chalets and its own reserve where rhinos and lions roam (from around $750 per person per night,wilderness-safaris.com ).

Eating There: Inside Etosha, camp restaurants serve palatable, if uninspired, German cuisine, including schnitzels and spaetzle, as well as game steaks like oryx, kudu and springbok. Packed lunches can be ordered for the road.

When to Go: Most travelers visit during Namibia’s dry season, May through October, when wildlife congregates around water holes. But visits during the November-to-April rainy season are rewarded with lush scenery and an abundance of birds, including thousands of migrating flamingos.

What to Pack: Be prepared for hot, dusty conditions during the day and occasionally chilly nights. The standard safari ensemble—breathable pants with zip-off legs; a lightweight, long-sleeved shirt; and broad-rimmed hat to shield against the sun—works well. Consider investing in a decent set of binoculars.

The following days brought encounters with hundreds more elephants, zebras that blocked the road and stared at our car, giraffes bumping necks in elegant mating rituals and ostriches sunning with their wings spread, not to mention hordes of herbivores, from kudu to oryx. Each water hole along the way proved a separate stage, with a separate drama unfolding. Mainly, we had the show to ourselves, passing maybe a few dozen cars all week.

But, there remained the pressing matter of lions. While everyone I bumped into as we worked our way from camp to camp had seen them (one sightings-book entry: “LIONS HAVING SEX!!!”), we had struck out. For all the virtues of a DIY safari—the sense of discovery, the solitude, the savings—at times a guide would have been nice.

On the last morning in Etosha, I found our savior in the office at Namutoni camp, on the easternmost edge of the park. A whitewashed fort rising from the dry bush, Namutoni was built by German colonizers in 1902, promptly burned down by locals, then rebuilt with better defenses in 1906. Today it’s home to palm-fringed swimming pools where little kids splash and chatter in Afrikaans, and a steakhouse that serves game and decent sausages, the latter a culinary legacy of those colonizers.

In the camp office, I learned that the day’s guided group safaris—on which lion sightings are nearly guaranteed—were booked solid. I was getting desperate when I saw an off-duty guide on the couch, practically winking at me from behind a newspaper. A deal was quickly and quietly hammered out: $400 Namibian (about $40) for a two-hour private tour.

“We’ve had reports of a lioness with cubs,” said the guide, Samuel Hilundwa, who turned out to be a veteran tracker. “But it’s far. I’ll have to drive fast.” As we barreled down gravel roads, whizzing past flora and fauna, Mr. Hilundwa offered rapid-fire commentary: Giraffes get darker as they age, lions spend 20 hours a day napping, a herd of zebra is called a dazzle.

We were still lion-less an hour later when Mr. Hilundwa spotted a pair of trucks pulled to the side of the road. He braked, rolled down his window and shouted something in Afrikaans to the other drivers. “There! 11 o’clock,” he said, pointing furiously. I squinted into the distance, my one chance to spot a lion quickly slipping away.

Then I saw her racing through the grass, one terrifyingly oversize house cat. I could make out the rounded ears, the huge paws. The lioness slinked along, low to the ground. In the distance, a herd of springbok raised their heads, picked up the scent and bolted.

The lioness broke into a sprint. “She’s hunting,” Mr. Hilundwa said, smiling. As I raised my binoculars for a better look, he offered a gentle warning. “You have to understand,” he said, “this may not be as pretty as National Geographic.”

NECK AND NECK AND NECK | A trio of giraffes approach a watering hole in Etosha National Park. Remy Scalza for The Wall Street Journal