By
J.S. MARCUS
Home to some of the French capital’s oldest mansions and newest boutiques, Paris’s Haut Marais district has a soaring public profile and rising real-estate prices to match.

“Five years ago nobody wanted to be here,” says Nicolas Wibaux, a Marais-based agent for Paris real-estate firm Daniel Féau, during a recent tour of the area just north of rue de Bretagne, Haut Marais’s de facto main street. “Now everybody wants to be here.” 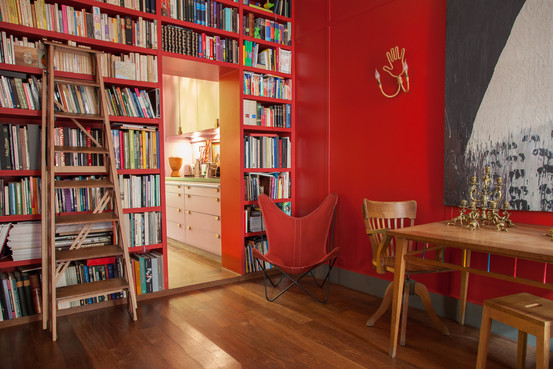 Architect Orn Gudmundarson,bought a storefront that had been used as a small factory for making clothes and turned it into this colorful loft. Alex Cretey Systermans for The Wall Street Journal

Paris notary Thierry Delesalle says that in the past five years, the average Paris apartment has increased by about 25%, to $1,056 a square foot. In prime areas of Haut Marais, prices in the same period jumped by 35.2% to 41.2%, reaching as high as $1,535 a square foot in the Archives quarter, between rue de Poitou and rue des Francs-Bourgeois.

Haut Marais, or Upper Marais, is a recently coined term generally used to describe the outer three quarters of Paris’s Third Arrondissement, the part of Marais proper that is outside the Fourth Arrondissement.

The historic Marais district was the stamping ground of French nobility in the 17th and 18th centuries. They left behind dozens of stately homes, known as hôtels particuliers, that still dominate the area. Over centuries, these grand buildings were converted into small factories and workshops. 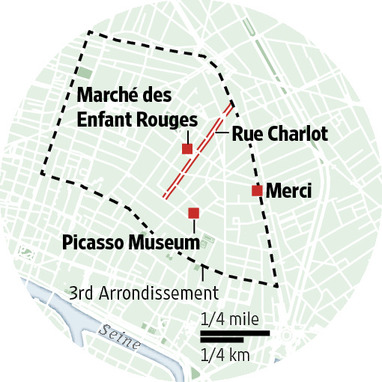 Early talk of gentrification followed the 1977 opening of the Pompidou Center nearby in the Fourth Arrondissement and the 1985 opening of the Picasso Museum in a Third Arrondissement hôtel particulier. Within a decade, Marais proper had become the center of Parisian gay life, and the nearby Place des Vosges, an early 17th century square, had become one of city’s most exclusive addresses. At that point, much of what is now Haut Marais was still downright shabby.

Haut Marais began to carve out its own identity over the past decade, after Pierre Aidenbaum, mayor of the Third Arrondissement, helped usher in a beautification program. The Marché des Enfants Rouges, a 17th-century market off rue de Bretagne, was rescued from destruction by the administration and is now once again a market instead of a parking lot. Rue de Bretagne got a dramatic makeover, with widened sidewalks, new trees and traffic restrictions. Mr. Aidenbaum, who first took office in 1995, will see the culmination of his efforts this month, when Le Carreau du Temple, a pair of underused 19th-century market halls just off rue de Bretagne, is set to reopen as a cultural and community center.

“Five years ago nobody wanted to be here. Now everybody wants to be here.”

Mr. Aidenbaum lives on rue Charlot, a prime Haut Marais street associated with Café Charlot, a watering hole opened in late 2007, where patrons include actor Jean Dujardin, Oscar-winning star of “The Artist” and an area resident.

In 2002, Orn Gudmundarson, a Paris-based Icelandic architect, bought a high-ceilinged, 646-square-foot storefront for $227,200 on rue Charlot, and remade it into a home and adjoining office.

“Like a lot of places in the neighborhood, this was a small factory for making clothes,” he says. “There were 15 sewing machines, and lights hanging down from the ceiling. There was no real floor, and the electricity had to be redone.”

The nearby cross street, rue de Normandie, was filthy, he says, and crowded with parked cars. Now, his colorful loft overlooks a cleaned-up street with restricted parking and a fashionable Italian restaurant. Jacques Genin, a celebrity chocolatier, opened a flagship store up the street. Paris designer Isabel Marant also has a boutique nearby, as does upscale men’s sportswear brand Ron Dorff.

“The limousines line up during fashion week,” says Mr. Gudmundarson. He adds that people have told him he can ask $826,000 for his property, but he has no immediate plans to move.

Mr. Aidenbaum and Paris notary Thierry Delesalle place the northwest corner of the Third Arrondissement in the Haut Marais area, and the buildings have the same look and feel. But buyers and high-end retailers have been slower to push into the area.

“A new part of Marais has developed,” says Paris financial consultant Thomas Papadopoulos. In 2006, Mr. Papadopoulos and his wife, now in their 30s, bought a raw space in a hôtel particulier on rue Beaubourg, the traditional border of the historic Marais district, for $964,000. They invested about $413,000 to convert the space, which had been part of a school, into a multilevel, three-bedroom, two-bathroom home with soaring ceilings. They plan to move with their two children to west Paris for an easier commute, and have listed the home for $2.27 million.

“Prices have exploded,” says Haut Marais pioneer Thaddaeus Ropac, the Austrian-born art dealer, whose gallery on rue Debelleyme works with artists such as Georg Baselitz and Francesco Clemente. Mr. Ropac and other art dealers are among the key players in Haut Marais’s transformation. They have made it the center of contemporary art in the city. Mr. Ropac’s gallery is just around the corner from the Picasso Museum, a neighborhood landmark set to reopen in June after a major renovation.

Also important are the retailers that have created a place of pilgrimage for fashion-minded hipsters. The new landmark shops include Merci, a concept store on Boulevard Beaumarchais, that opened in 2009.

All of the changes have helped to push some top prices in Haut Marais to levels associated with prime Left Bank neighborhoods, says Daniel Féau’s Nicolas Wibaux. He cites a recent sale of a fourth-floor apartment on the Square du Temple, a revitalized green space at the end of rue de Bretagne. The 156-square-meter apartment, with four bedrooms and two bathrooms, sold for $3 million, or more than $1,663 a square foot. 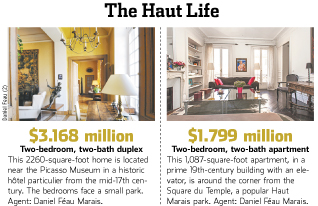