Rome Opens Some Hidden Rooms of a Venerable Castle 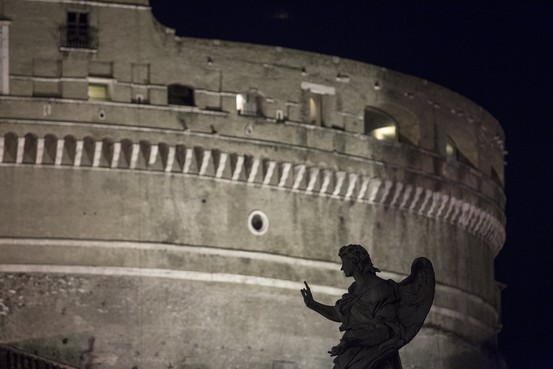 Rome authorities are throwing open some parts of the papal hiding place for the first time, offering a glimpse of a garrison designed to protect pontiffs-but still provide some creature comforts. Giulio Napolitano for The Wall Street Journal

Mercenaries ruled by the Holy Roman emperor, Charles V, were closing in on Pope Clement VII. The pontiff made a break for it. He bolted half a mile along the Passetto di Borgo, a secret passage tucked into the Vatican’s high defensive walls. It led to the safety of Castel Sant’Angelo, the fortified castle that already symbolized papal power back in 1527.

In the castle’s basement, the pontiff and his Swiss Guards ate bread baked with flour that came from a mill set up inside the basement. They drizzled oil made from an olive press assembled there and drank water from a large tank. Pope Clement even bathed in a heated bathtub modeled after the baths of ancient Rome.

Now Roman authorities are throwing open some of these papal hiding places for the first time, offering a glimpse of a garrison designed to protect pontiffs but still provide some creature comforts.

This place “is like an open art book,” said Maria Piccarreta, head of the Castel Sant’Angelo Museum. In a project that started last month and lasts until Sept. 7, Italy’s culture ministry is allowing public access to these long-hidden places every evening except Monday.

Visitors can see the flour mill and olive press, still in excellent condition, as well as everyday garrison utensils such as cutlery, jars, and ceramic plates and cups. Officials have even found a stick that they think whipped the mules that drove the flour mill. The refuge, known as St. Mark’s Bastion, allowed the pope to survive his enemy’s siege for a month before the pontiff, seeking to end the suffering that Charles V’s troops were inflicting on Romans, finally surrendered.

Castel Sant’Angelo has always been a mixture of military might and high culture. Emperor Hadrian, who wanted the building as his tomb, built it in the second century A.D. Later emperors decided to make it part of the city’s defensive measures against barbarians. Its proximity to St. Peter’s Basilica made it a handy tool for papal power.

The castle got its name from stories about a sixth-century miracle: Many believed that the Archangel Michael appeared there to signal the end of the plague that had devastated Rome. A large statue of the angel still stands atop the building.

“Castel Sant’Angelo represented the earthly power of the popes, while St. Peter’s Basilica reflected their spiritual power,” said Francesco Perfetti, professor of contemporary history at Rome’s Luiss University. The popes used the castle as a vault to store money, gold and secret archives and also as a jail for political prisoners.

The pontiffs commissioned the great artists of the day to embellish the castle. Around 1446, the Tuscan artist Perin del Vaga and his followers decorated the Paolina room, dedicated to Pope Paul III of the wealthy and powerful Farnese family.

Over the centuries, the castle became a symbol of the city of Rome, akin to the Bastille in Paris or the Tower of London. At the end of the 1800s, the newly created Italian state turned the castle into a military barracks. In 1925, it became a museum. It is now one of the city’s top attractions, with more than 900,000 visitors last year.

The catwalk-like Passetto, reportedly built by Pope Nicholas III in 1277, is hard to detect from below. Pope Alexander VI also used the Passetto to flee from enemy soldiers in 1494. When the Passetto reaches the castle, a staircase leads to various rooms, including the basement.

Around the 17th century, the basement was filled with earth to bolster the castle against cannonballs and give greater stability to the heavy arms that were placed in the upper part of the castle. In the 1930s, the Italian state started digging out the basement again.

The papal bathing room got little use after the Renaissance; hardly any restoration was required to put it back on display. The room is small—a bit more than 100 square feet—but rich in elaborate decorations of birds, angels, flowers and the crossed keys that are part of the papal coat of arms. The room has a vaulted ceiling above the stone bathtub that’s painted in bright red, yellow and light gray.

Scholars believe a furnace could heat the water that flowed into the tub. The existence of a heated bath could reflect a return to standards of personal hygiene that were widespread in ancient Rome, made possible by an extensive aqueduct system, but lost during the Middle Ages.

The room is “even more fascinating as you enter by climbing down a staircase and you find yourself in front of such beauty,” said Ms. Piccarreta. “It is very rare as to find a Renaissance bathroom, as those in use would be transformed as time went by.”

Visitors can wander from the baths into a grimmer corner: the prison cells that are said to have housed philosopher Giordano Bruno before he was burned at the stake in 1600 for heresy. The cells are bare, gloomy and narrow and include instruments of torture— among them a nailed collar, handcuffs and chains. Oddly, the collar is embellished with flowers, a touch that perhaps “reflected the ambivalence of the church over torture,” said Ms. Piccarreta.

Write to Liam Moloney at liam.moloney@wsj.com