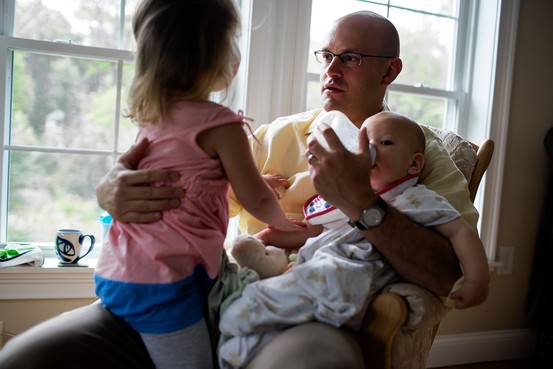 Fred Bermont with his daughter Elyse, 2, and son Dylan, 9 months, in their home in Lexington, Mass., before he drops them at day care and goes to work at a pharmaceutical firm. M. Scott Brauer for The Wall Street Journal

Can working fathers have it all? Some of them are giving it a shot.

A new generation of fathers with corporate jobs is joining the debate about balancing work and family, a conversation long driven by working women. As the number of dual-earner couples grows and more men make sacrifices to support their wives’ careers, some fathers are asking employers for guidance and action or tapping flexible-workplace policies originally designed for working mothers. Others are curbing their career goals to spend more time at home.

Employers have been slow to recognize men’s role as caregivers, fathers and researchers say. And, as a younger generation brings new expectations for fatherhood into the office, they will have to challenge an assumption their female colleagues have faced for years: It is impossible to be both an involved parent and a star performer.

The shift comes at a time when more women are out-earning their husbands—a percentage that has risen steadily from 3.5% of families in 1960 to 15% of families in 2011, according to the Pew Research Center—and men are redefining what it means to be a dad. A study by the Boston College Center for Work & Family found that a majority of fathers, especially those under 40, are moving away from the traditional “breadwinner” role and see themselves as responsible for both the emotional and financial needs of their children. 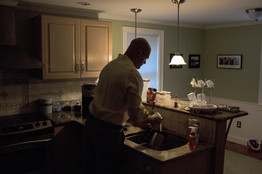 As the number of dual-earning couples grows, more fathers are balancing the needs of work and family. Here’s a typical morning in the life of one working dad.M. Scott Brauer for The Wall Street Journal

“There is considerable confusion and angst among young men about how they’re going to make it work,” says Stew Friedman, a management professor and head of the Work/Life Integration Project at the University of Pennsylvania’s Wharton School.

The White House weighed in this week. Government officials, corporate executives and parents, including Daniel Murphy of the New York Mets—who came under fire for taking paternity leave earlier this year—gathered there for a summit about the trials of working dads. A third of working men in 2013 had children under 18, according to the Labor Department.

Thomas Hsu, an Accenture PLC executive with two young children, began advocating for fellow fathers at work after his wife’s medical-school schedule prompted him to request a move from his travel-heavy consulting role to one in internal strategy.

“I always knew I wanted to be more involved than my dad was,” he says. “I thought I was the only one who felt that way.”

Mr. Hsu says Accenture bosses regard taking on such roles as a sign of leadership. A company spokeswoman said no change to parental-leave policies is expected in the next fiscal year.

“The number of U.S. employers taking extra steps to specifically listen to what working dads need, and not just create initiatives that are gender-neutral, is quite small,” says Ellen Galinsky, president of the Families and Work Institute. “But their ranks likely will increase, especially as young fathers become more assertive about their needs in caring for their children.”

Ford Motor Co. allows salaried U.S. employees to work a reduced schedule. Around 8.5% of 600 workers doing so in 2013 were men, up from 5% in 2009, according to Ford. As men take on more caregiving duties, they need flexibility at work, said Felicia Fields, Ford’s group vice president of human resources.

Yet many still fear that reducing time at the office will dead-end their careers.

Ford safety engineer Roger Trombley, 37, started a 70% schedule after his son’s birth in 2009. He says he was the first man in his department to do so, but three male colleagues eventually followed suit. At first, “they didn’t think it was really an option for them as guys,” he recalls.

Working against men is a stigma that those who identify themselves as active fathers are unwilling to work hard or put the company first.

A 2013 paper from the University of Toronto’s Rotman School of Management found that colleagues regard active fathers as distracted and less dedicated to their work. At the same time, a Harvard researcher has shown that men with children earn higher salaries when their wives work less than full-time.

Taken together, the evidence suggests that men in traditional breadwinner roles are rewarded, either because of cultural assumptions or because they are able to put their jobs first, while men who act as caregivers are hurt for doing so.

Employers still tend to promote people who appear willing to sacrifice all for their careers, says Jessica DeGroot, founder of ThirdPath Institute, an organization that advocates better work-life policies. Most current leaders rose to the top under the old rules and that shapes their thinking about what it takes to succeed, she adds.

That approach will have to change as companies realize that their future leaders—both men and women—will turn down promotions or curb their ambitions without greater support for their parenting roles, says Brad Harrington of the Boston College Center for Work & Family.

Fred Bermont, 35, left his job at a Boston-area pharmaceuticals firm in pursuit of work-life balance in 2012, shortly after his first child was born. He joined Shire PLC, which offered paid paternity leave and some flexible scheduling. He’s usually at his desk by 8 a.m. and leaves at 4:30 p.m. 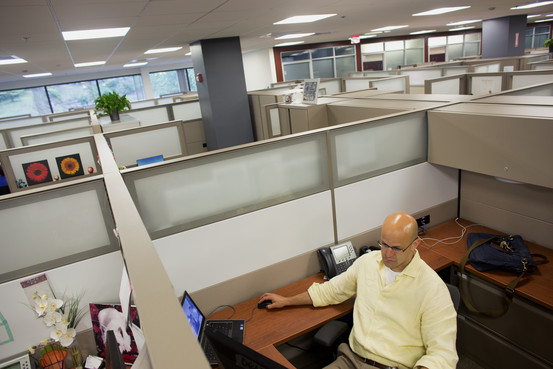 Mr. Bermont is usually at his desk by 8 a.m. and leaves at 4:30 p.m. M. Scott Brauer for The Wall Street Journal

“I don’t know if I can work like this and become a vice president,” says Mr. Bermont, a senior specialist in the clinical standards and data management department. “But I don’t know if I want to be one. It is more important to be with my family and not be working and traveling all the time.”

Insurer MetLife Inc. started a virtual coaching program in 2013 for expecting parents, along with training for their supervisors. Since 2012, Ernst & Young LLP has offered a similar program—but only included men after a female officer suggested the change.

American Express Co. ‘s occasional Fatherhood Breakfast Series invites male colleagues, including high-ranking executives, to talk about blending career and family. It was started in 2010 by Todd Goodwin, a vice president of information management, who says he hit a breaking point years ago while trying to balance his job with his daughters’ school drop-offs and other family duties.

Eddie Hollowell Jr. , 31, attended a MetLife parenting webinar shortly before his son’s birth last June. “I started to think, ‘Oh my God, I am the only guy here. Maybe this is not for me,’ ” the internal communications staffer remembers.

Following his wife’s return to work, Mr. Hollowell used vacation time to work a four-day week last August and December. Because he had just started a new role in May 2013, “it was awkward to even broach the subject of a reduced work schedule,” he says.

The webinar, he said, helped him ask his boss for the time off. He will work a four-day schedule again this July and August to help with child care.

“I wouldn’t say that it has been easy balancing work and family,” he adds.

Write to Lauren Weber at lauren.weber@wsj.com and Joann S. Lublin at joann.lublin@wsj.com