The Secret to a Happy Marriage: Scrabble

By
SHIRA DICKER and
ARI L. GOLDMAN
When we get invited to an engagement party—something happening more now that we have children in their late 20s—we always give a Scrabble set. Invariably, we wrap it up, attach a bow and include a note with a promise: “Here is one of the secrets of a happy marriage.”

During our three decades of married life, Scrabble has kept us together, settled our disputes, relieved our tensions, provided a safe arena for competition and given us the words with which to talk through differences. 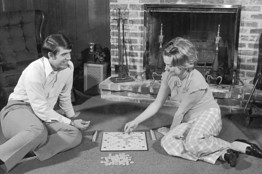 Many old-school board games are now gathering dust, but Scrabble’s popularity has moved to the Web. Getty Images

We play every Friday night, our night for family dinners, when distractions such as phones, text messages and emails are banned. When our three children still lived at home, we would try to draw them in—and occasionally succeeded. Now that we are empty nesters, we no longer need any such preamble.

The game that became Scrabble was invented during the Depression by Alfred Mosher Butts, an out-of-work architect. Many old-school board games are now gathering dust, but Scrabble’s popularity has moved to the Web, where millions play the game (or variations such as “Words With Friends”) every day.

Some prefer the iPad version, but the old wooden rack and word tiles still work for us. When we have dinner guests, we often invite them to join in and occasionally get a taker. But in truth, we most enjoy playing by ourselves. Shira has dubbed this peculiar form of fidelity Scrabbleogamy.

Scrabbleogamy isn’t just a sacred institution in our marriage. In many ways, it is the secret to our marriage, providing a framework for friendly competition, constructive conversation and the resolution of problems.

We have our routine. First, we put the board on a Lazy Susan so that we can rotate it easily from turn to turn. Because we observe the Jewish Sabbath, we don’t use pen and paper on Friday nights, so we take out our favorite books and put bookmarks on the corresponding page to keep score. Even those books stay constant: Shira always uses “The Book of Martyrdom and Artifice: First Journals and Poems, 1937-1952” by Allen Ginsberg; Ari uses “The Poetry of Robert Frost: Complete and Unabridged.” 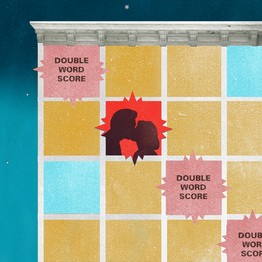 The Official Scrabble Dictionary stands ready, although we use it only for challenges. (No rifling through to find words.) Our one departure from the rules: We keep a list of two-letter words for consultation, thereby avoiding challenges for combinations such as SH, ZA, OW, XU and HM (which are words) and PO, TE, EQ and KU (which aren’t).

The dictionary is the final authority, and whoever is wrong loses a turn. The world we inhabit may be filled with ambiguity, but in Scrabble, there is clear right and wrong. And our games often have hidden messages. Shira once opened with MAGIC for 26 points. She turned to page 26 in Ginsberg and found an unnamed poem about Barnard College, a block away from our Manhattan apartment:

Every year at our Christmas dance

We never ever wear any pants

We like to give the boys all a chance

We are from Barnard, balls, etc.

Ari followed with what we call a “bingo”—using all seven of his letters to build on Shira’s MAGIC. He put down CLOWNING for a grand total of 89. While Shira struggled to keep her composure, Ari read from page 89 in his Frost book, the end of a long poem called “Housekeeper.” The tone was jarringly different:

What are they doing to me, these two?

Do go along with him and stop his shouting.

She raised her voice against the closing door:

“Who wants to hear your news, you—dreadful fool.”

The tension lifted when Shira put down FLOUT, following on her earlier MAGIC. We wondered what Mozart would have done with the “Magic Flout.”

Shira came from behind and won that night. (She wins four out of five times.) The trajectory of the game is a lesson she should remember afresh, she says: She is a self-admitted sore loser who will sulk when Ari gets one S too many.

Shira, who has a mystical bent, admits to wondering whether God is somehow involved in these games, even worrying that she has fallen out of divine grace if she loses. Ari, more practical, understands his victories merely as proof that his wife isn’t always smarter than him.

By a conservative estimate, we’ve played 1,560 Scrabbleogamous games over the last 30 years. That has meant tens of thousands of words and letter combinations. Each game has the same rules and letters, but with each, we reach a new meaning and milestone.

—Shira Dicker is a New York-based writer and publicist. Ari L. Goldman is a professor at Columbia University’s Graduate School of Journalism.