By
INTI LANDAURO
Updated Feb. 1, 2014 12:10 a.m. ET
Leonardo da Vinci’s famous unknown woman is set to get her color back, and a “Mona Lisa” makeover may eventually follow.

Undeterred by the controversy that followed the Louvre’s restoration of another da Vinci masterpiece two years ago, officials at the Paris museum recently revealed they are planning to restore da Vinci’s “La Belle Ferronnière,” also known as “Portrait of an Unknown Woman.” The decision has reignited debate about whether renewing extremely rare and high-profile paintings is necessary or more of a ploy to attract attention and thus more visitors to museums.

Vincent Delieuvin, a restorer at the Louvre, said the museum had to overcome a long-standing reluctance to work on its da Vincis. “Previously we didn’t dare touch this work,” said Mr. Delieuvin, a conservationist in Italian renaissance art at the Louvre’s department of paintings.

Restorations at the Louvre 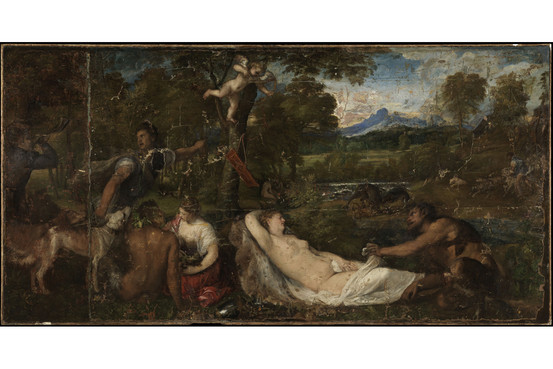 Given the damages suffered by Titian’s “Jupiter and Antiope,” also called “The Pardo Venus,” the restoration process is painful. A team of restorers has worked on it for more than a decade. © Musée du Louvre/Daniel Vigears

But restoration techniques have improved to the point where the museum thinks the process is safe. “All paintings one day or another need to be restored,” the “Mona Lisa” too, Mr. Delieuvin said, hinting that the famous painting will one day get a face-lift. “It’s not a work in an exceptional health. It’s become very yellowish and very dark.”

For now, the Louvre is focusing on “La Belle Ferronnière,” a portrait believed to be of Lucrezia Crivelli, a mistress of Duke of Milan Ludovico Sforza, at whose court da Vinci worked between 1483 and 1500. The painting got its “Ferronnière” name because it was once confused with a later portrait of French king Francis I’s suspected mistress, who was called that.

The da Vinci portrait, in some ways, is a precursor to the “Mona Lisa.” In the “Ferrionnière,” by working on the different orientations of the woman’s chest, face and eyes, the artist gave the portrait an impression of movement. But the Louvre says these features have become harder and harder to make out.

“The many layers of varnish added over the centuries are getting old and make the painting dark and yellowish,” Mr. Delieuvin said. After the restoration, “the contrasts and colors will come out again; so will the feeling of movement.”

Only 14 paintings are universally attributed to da Vinci, said Mr. Delieuvin, of which five are in the Louvre.

Art historians have long debated how works of art should be restored. In 2011, the Louvre sparked a firestorm with its restoration of da Vinci’s “The Virgin and Child With St. Anne.” Two of France’s top art experts resigned from the advisory committee set up by the museum to supervise the process, arguing the restoration team had brightened the painting’s colors beyond the artist’s intention.

“Time alters the original pigments,” says Ségolène Bergeon Langle, former director of conservation for the Louvre and France’s national museums, and one of the two who resigned. “What you find behind the blond veil of the varnish is no longer what the painter had intended.” As for the Ferronnière restoration, “there’s really no need,” she said. Jacques Franck, a Paris-based consulting expert to the Armand Hammer Center for Leonardo Studies at the University of California, Los Angeles, agrees: “There is no deterioration justifying any kind of restoration. There is softness on the woman’s face that is vulnerable in case of restoration.”

Some critics say the commercial buzz—like that surrounding the Louvre’s “St. Anne” restoration—is part of the appeal for museums to restore five-century-old paintings. “A high-profile restoration draws more visitors to a museum and is generally good for a restorer’s career,” said Michael Daley, who runs ArtWatch International, an independent organization lobbying against restorations of famous art pieces, who opposes the “Ferronnière” restoration.

In response, the Louvre says it isn’t desperate to attract more visitors, as it already draws close to 10 million people a year.

“People were used to seeing a dark painting with little contrast, but it was simply dirty. In his writings, Leonardo always discussed colors,” said Mr. Delieuvin about “St. Anne,” adding that many other scholars disagreed with Ms. Bergeon Langle and pushed for a deeper restoration. “There is no conspiracy out there plotting to destroy all of Leonardo’s paintings, like in a novel,” he said.

The “Ferronnière” restoration involves less-intrusive methods than those used for the “St. Anne” as the painting is in better condition, he says. The painting will be analyzed using X-rays and other methods to determine the thickness of the different layers of varnish. The restoration team will dab the painting with cotton buds dipped in gel-like solvents, while constantly measuring the thickness of the varnish to avoid touching the original paint. The bidding process to select a restorer begins this month.