By
RICHARD CORK
Feb. 7, 2014 8:46 p.m. ET
Now on special display at London’s National Portrait Gallery, which is conducting a fund-raising campaign to purchase this painting for £12.5 million ($20.4 million), Anthony Van Dyck’s last “Self-Portrait” astonishes me with a potent sense of immediacy. The artist seems to be glancing in my direction, and the impulsive turn of his head is caught in all its willful energy; he seems to be raising his arm in order to make a brush stroke. Modest in size compared with his monumental images of King Charles I and other powerful patrons, this “Self-Portrait” concentrates on the artist’s head, shoulder and upper arm. He sets himself against a dark, plain background. Nothing could be further removed from the shimmering flamboyance of the aristocrats posing in Van Dyck’s grandest full-length portraits. But this canvas is mesmeric, and turns out to be one of the most revealing and poignant works he ever produced. 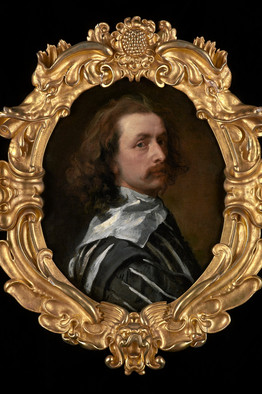 Completed only months before his death, the portrait is one of the most revealing and poignant works that Van Dyck ever produced. Philip Mould & Co

At first, Van Dyck seems very contained. No obvious emotion appears on his features, apart from a strong urge to gaze as intently as possible. He may be staring at a mirror, assessing his own face in order to define it on canvas. Van Dyck had always been fascinated by self-portraiture, right back to the time when, as a precocious teenager in Antwerp, Belgium, he painted a vivid likeness of himself with a sunburst of tousled hair. Three years later, in 1618, he was working with Rubens and became his chief assistant. But Van Dyck rapidly emerged as a prodigious artist in his own right, and this success was crowned when, in 1632, Charles I appointed him as principal painter at the English court. Knighted and sought-after by an avalanche of aristocrats, Van Dyck dressed in high style and, according to his early biographer, G.P. Bellori, kept “servants, carriages, horses, musicians, singers and clowns, who entertained all the dignitaries, knights and ladies who visited his house every day to have their portraits painted.” But he never enjoyed robust health, and died in December 1641 a few months after completing this final “Self-Portrait.” He was only 42 when the end came, and his remorseless workload may have hastened his death.

No obvious sign of illness can be detected in the “Self-Portrait.” Van Dyck looks virtually wrinkle-free, and middle-aged plumpness does not interfere with the chiseled, sculptural clarity of his forehead, nose and chin. A determined, almost pugnacious lower lip juts out between his undulating moustache and trim beard. As for his abundant head of hair, it still surges up defiantly from his lofty brow. Van Dyck’s paint-handling loosens dramatically as he captures the vigorous brown strands tumbling down the side of his face and gathering in a thick, dark mass on his shoulder. Unlike the meticulous coiffure he so often depicted in his portraits of high nobility, Van Dyck’s hair rejoices in a tempestuous surge of freedom.

His spontaneity as a painter becomes even greater when he tackles his white shirt and slashed black doublet. He delights in revealing the shirt’s rumpled disorder. It liberates his brushmarks even more, allowing him to make some astonishingly uninhibited strokes that charge their way through the material. As for his dashing black doublet, it is enlivened by a series of bold white swipes. They disclose the sheer vitality of Van Dyck’s mark-making, and seem almost abstract in their determination to proclaim the substance of paint rather than its ability to simulate apparel.

Judging by the angle of Van Dyck’s upper right arm, he is caught here in the very act of applying paint to canvas. So in another respect, this “Self-Portrait” focuses on the drama of the creative moment. But the longer I look at this multilayered image, the more complex it becomes. Van Dyck appears increasingly ill-at-ease, as if his fierce concentration on the task at hand has been diverted by some unexpected intrusion. He seems startled, and I can imagine him feeling annoyed by the disturbance. His mouth might be on the point of opening. A hint of a frown can be detected curving up from the edge of his raised right eyebrow.

What is really going on here? Van Dyck’s last “Self-Portrait” may well reflect his gathering alarm about the state of his adopted home. Charles I, who contributed so greatly to Van Dyck’s success, had alienated a growing number of powerful forces. And Van Dyck’s eminent position within the royal court must have alerted him to the danger now confronting the monarch. (Civil war would break out in 1642.) Van Dyck was sensitive enough to appreciate the problem, and his anxiety could have been exacerbated by his own illness.

Van Dyck probably sensed, when he stared at his own reflection and set it down on canvas, that his health was ominously poor. In August 1641 the Countess of Roxburghe reported in a letter that he had been ill for a long time, and soon afterward Van Dyck grew so infirm that he abandoned a major commission to paint Cardinal Richelieu’s portrait in Paris. He must have felt very frustrated, and at the base of the elaborate oak frame surrounding his last “Self-Portrait” a demonic face scowls as he opens his mouth in a roar of rage. There is certainly a haunting awareness of transience in the “Self-Portrait.” Even as he emphasizes the strength of his penetrating gaze, Van Dyck conveys a melancholy awareness that nothing of him will endure very long, apart from the art he creates. The white shirt that occupies such a prominent space near the center of the painting looks as turbulent as a storm-stricken sea. This boldly handled passage of paint could almost be seen as prophetic, hinting at the military tempest that was about to engulf England and destroy the king along with so many of his subjects in a catastrophic conflict.

Whether Van Dyck realized it or not, this painting looks eerily prescient. The artist portrayed here seems to be acknowledging that the entire royalist world, which had sustained him so well in England, is doomed. Van Dyck can be seen struggling with this perception as he continues to define his own troubled features. The last “Self-Portrait” is, above all, a very honest painting, uncompromised by the need to produce flattering images of sitters bolstered by their own ostentatious grandeur.

—Mr Cork is a British art critic, historian, broadcaster and exhibition curator. Four volumes of his collected writings on modern art were published by Yale in 2003.