Eating scorpions on a stick and carrying a little one up the Great Wall of China are part of the fun of visiting the Chinese capital of Beijing with your children. WSJ contributor Heidi Mitchell discusses on Lunch Break. Photo: Heidi Mitchell

TURNS OUT, scorpions don’t taste so bad—though eating them is more about texture than flavor. They do impart a satisfying crunch.

I was with my husband and three children in Li Qun, a roast-duck and fried-insect restaurant in a back alley of a rundown hutong—a neighborhood of traditional courtyard houses—in Beijing. The only “facility” was a hole in the ground down the block, but still, on the walls of the restaurant hung photos of famous visitors: Jet Li, Al Gore. 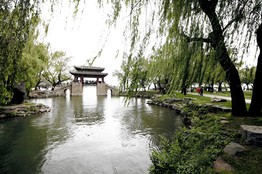 My two eldest kids, 10 and 8, were determined to have some dining escapades in China. In the Wangfujing night market, we’d seen live, shoe-size arthropods impaled on sticks, ready to be cooked, but the yuck factor was insurmountable. At Li Qun the bugs were an inch long, dipped in batter, and deep fried, making them just palatable enough. In a video we made, my 10-year-old, Gideon, plucks a crispy critter from a bed of rice crackers, pops it into his mouth and swallows. “Tastes just like cockroach!” he exclaims. Then he entreats me to crunch a scorpion for posterity. And because my family was in Asia to do what good travelers around the world do—push ourselves outside our comfort zone—I did.

Photos: A Beijing for All Ages 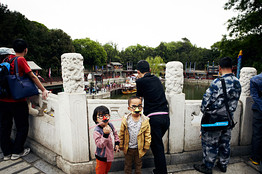 Beijing is not the most obvious destination to visit with children. The traffic is murder, the smog so bad locals wear face masks and the tap water isn’t potable. “It’s so dirty,” a Chinese-American friend back home warned; we should time our trip to avoid spring’s dust storms, someone else suggested. But our children had just completed their first year of Chinese-immersion school in New York, and after months of research, we concluded that the capital might be more kid-friendly than it seems. 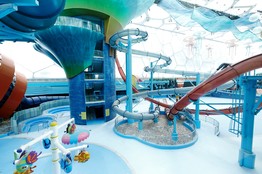 The Beijing National Aquatics Center, aka, the Water Cube Zachary Bako for The Wall Street Journal 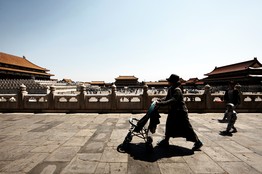 The Forbidden City Zachary Bako for The Wall Street Journal

In Beijing, the ancient is constantly butting heads with the modern. Songs, Mings, Qings and many other dynasties ruled China from the city, over the centuries erecting the Forbidden City, the Summer Palace and the Great Wall. Now those icons have competition from attractions like the $140 million National Aquatics Center—or Water Cube—and the National Stadium (aka the Bird’s Nest), built for the 2008 Olympics.

Our stint in Beijing capped off a two-week visit to eastern China, most of it spent in tiny villages and holiday spots unfamiliar to Americans. Remote Lands, which specializes in custom tours of Asia, did most of the planning, booking hotels, transfers and many activities. With the bulk of the logistics taken care of, we had space for serendipity and discovery.

In Beijing, we started where everyone else does: in Tiananmen Square, built in 1415 as the royal entrance to the Forbidden City, the imperial palace. The square was thick with Chinese tourists, and to their eyes my family must have been a novelty—people insisted on taking photos with my blond husband and pulled my 5-year-old daughter, Talia, from her stroller for more shots. (I was invisible; perhaps brown-haired mothers aren’t so remarkable.)

“Tourists would grab my blond husband to take photos with him.”

The Forbidden City is beautiful and well preserved, from the gilded lions guarding the Gate of Heavenly Purity to the serene Imperial Garden. The kids recognized the complex from Bernardo Bertolucci’s 1987 film, “The Last Emperor.” But little ones can only take so many halls of thrones and tapestries. (“Where is the princess?” my daughter asked our guide a number of times.) So we went to take a rickshaw ride through courtyard houses yet to be replaced by gleaming condos.

A kind woman let us enter her hutong home, which made up one side of a courtyard. The mistress of the house was so well off, she explained, she did not have to work. My jaded little New Yorkers were baffled. Two rooms for three people? A shared stove—outside?? My husband and I attempted to turn this into a teachable moment, but the kids had moved on and were exclaiming over the mistress’s pet cricket. 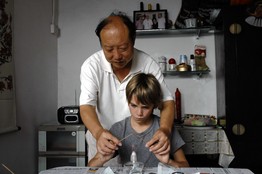 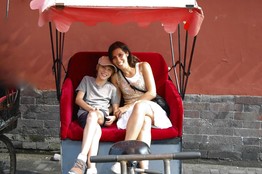 The author and Gideon in a rickshaw Colin Mitchell

To work off some of their energy, we raced up the steps of the Drum Tower, a 154-foot-tall structure built during the reign of Kublai Khan. As we arrived, 25 percussion students entered the hall, and in perfect unison pounded the hell out of 6-foot-wide drums. We had to rush off to an hour-long date that Remote Lands had scheduled with a master kite-maker. In his tiny kitchen, he taught the kids to make miniature kites by heating sticks of bamboo over a candle until they were pliable, then gluing on sheets of rice paper. Rain had cleared the sky of smog and the streets of muck, and in the quiet hutong, my children flew their painted masterpieces—a butterfly, a dragon and a bird.

At a corner store, while my husband took snaps of a ramshackle soda display, our 8-year-old, Malachi, reached into a basket for a tart yogurt drink he’d come to love. He took a sip from the straw, then made a sour face. “Someone already drank it!” he yelled. Using their broken Mandarin, the children learned from the shopkeeper that Malachi had pulled the bottle from a recycling basket. 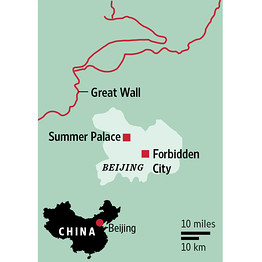 Getting There: Several airlines offer nonstop flights to Beijing from major U.S. cities, including New York, Los Angeles and Chicago. Since our Chinese is fairly rudimentary and we were traveling with children, we had a travel agency, Remote Lands, book hotels, transfers and many activities ( remotelands.com ).

Staying There: The early-1900s Raffles has a prime location just outside of the Forbidden City and next to the Wangfujing shopping district (from about $227 a night, raffles.com ).

Eating There: Li Qun, which specializes in Peking duck, is a hutong hole in the wall, but it was good enough for Al Gore (11 Beixiangfeng Hutong, Qianmen Dongdajie). Try eating at the Wangfujing night market. It’s not all fried scorpions—there are spit-roasted baby chickens and lizards, too.

What to Pack: Packets of toilet paper, baby wipes and Purell are a good idea, as cleanliness is not always up to American standards in Beijing. Also bring a light rain jacket and a good attitude. Long lines and crowds are common—as is unabashed staring.

We morbidly joke that Malachi’s last words will be “Hold my beer and watch this.” But he does make our family more intrepid. At the Wangfujing night bazaar, a street swarming with food stalls, tchotchke booths and shoe peddlers, he bought a ceramic “tea boy” that was supposed to urinate once filled with hot water; when it didn’t work, he negotiated for a new one. He convinced fruit vendors to let him try one of everything. At the Summer Palace, imperial gardens that date to the mid-1700s, he ignored guards’ warnings to stop rock-hopping along the edge of a lake. What did he care—he was 7,000 miles from home!

And unlike at home, in China we adopted some of his attitude. We jumped down the stairs of the ancient Bell Tower, across the street from the Drum Tower; we crashed a wedding reception at the Raffles Hotel.

On our final day in Beijing, a driver took us to one of the best-preserved sections of the Great Wall, Mutianyu. Navigating the market that lined the path from the parking lot took time: Malachi had to bargain for T-shirts, passion fruit and chess sets. (Our matching Communist Youth hats cost $1 each.) On the stairs of the wall, Talia declared, “I am a great stepper!” though she later clarified that she wasn’t the Queen of Walking. I put her on my shoulders as we made our way to the Schoolhouse, a former primary school where artists in residence can now blow glass or paint, and students learn to grow organic produce and cook it in the property’s restaurants.

We scanned the menu at one, called the Canteen; there were no scorpions to be had. Across the brick courtyard, I made eye contact with another foreign mom. She winked and raised her glass. At that moment I was certain that, despite the language barrier, despite the used yogurt, despite the sometimes hectic schedule, seeing Beijing through my children’s eyes was worth the inconveniences. And where else would I have the guts to eat a scorpion again?