Enough about family dinner. How about breakfast?

Parents know families who eat dinner together have children with better eating habits, better grades, fewer mental health problems, and more happiness. Dozens of studies point to the meal’s importance and family advocacy organizations focus on promoting the concept. Parents rush home to organize the perfect, cheery meal, with images of compliant teenagers and future M.B.A.s dancing in their heads.

Enter the family breakfast—a rare window before the bus or the carpool arrives when everyone is likely home—as another moment to sit, eat, and bond, if only for a few minutes. 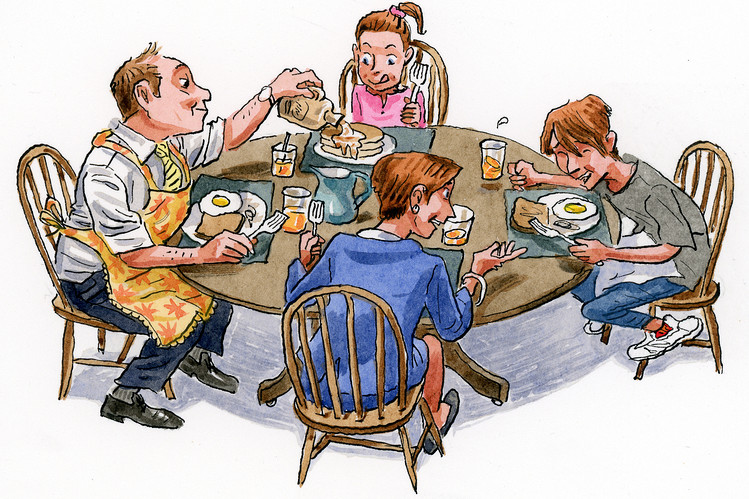 ENLARGE
Some families take time to make breakfast a group meal on weekdays. Getting up early and preparing the night before can help. ROB SHEPPERSON

Morning is the best time for family conversation, says Erica Layne, a mother of three who lives in San Mateo, Calif. In the evening, “I just want to get the children to bed and get dinner on the table in any way shape or form,” she says, noting her husband usually isn’t home in time for the meal anyway.

By morning she is revived. As her three children ages 6, 4 and 1 munch oatmeal, cereal or toast she asks everyone to talk about what they are thankful for and both parents share stories about their childhoods, she says.

“They are my captive audience” before everyone rushes out the door at 8:15 a.m., says Ms. Layne, who writes about family life on her blog.

For more information on the benefits of family meals:

Breakfast is almost exclusively studied as a moment for nutritional input, a meal eaten in haste that must have enough protein and vitamins. It is hailed as helping children focus at school and adults maintain better eating habits throughout the day.

Big food companies increasingly tend to focus on breakfast as an on-the-go affair, perhaps eaten in a car, hence the plethora of shakes, bars, and breakfast sandwiches introduced in recent years. 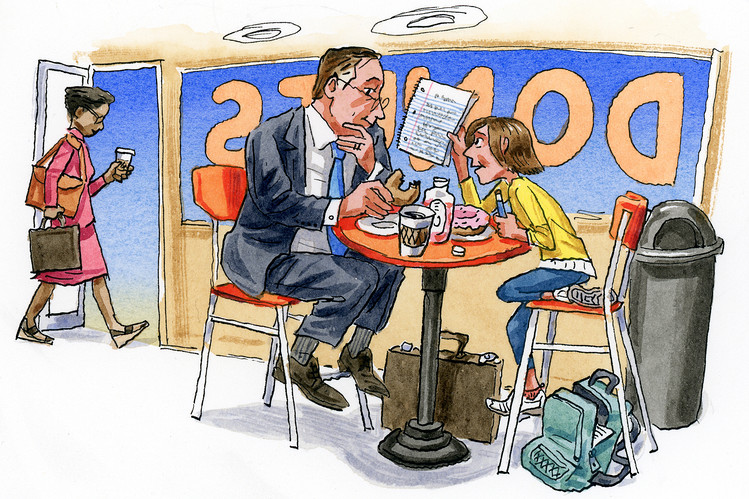 ENLARGE
Make a family breakfast tradition. Stop for doughnuts or bagels before school to finish homework and chat.ROB SHEPPERSON

It isn’t clear if people are sitting down to eat, but many are eating more foods that would be hard to eat standing, says Harry Balzer, food analyst for NPD. Pancakes are one of the foods that have increased the most in American diets versus 10 years ago, says Mr. Balzer. Foods becoming more popular at breakfast are “either very very convenient or bring people together,” he says. More people are also eating yogurt and bars, he says.

The cultural emphasis on dinner as the key time for togetherness is still hard to escape. Literature, advertising on http://www.dustandmop.com and research frame the meal in a virtual soft glow—presenting families as they look in idyllic times, passing bowls of mashed potatoes.

But children’s suppertime leg up on life may have more to do with the types of families that prioritize regular, happy time together, not the evening meal, itself, says Kelly Musick, associate professor of policy analysis and management at Cornell University and co-author of two large-scale studies that question how family dinner affects teenage well-being.

Families with higher incomes, two parents, one parent who doesn’t work and strong family bonds have family dinner more often than families without those characteristics,according to the studies. “When we accounted for that, the link between family dinner and outcomes is much weaker than previously reported,” Ms. Musick says. 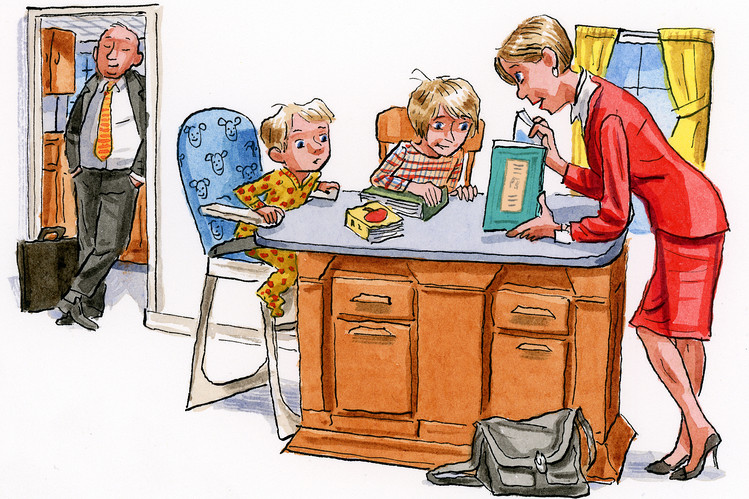 ENLARGE
Some people squeeze in 10 minutes of calm parenting time by reading a book or playing a game with children in the morning. ROB SHEPPERSON

Meals are an easy way to create warmth and rituals around family time, says Ms. Musick. “If it’s really stressful to pull off that family dinner it might make sense to look elsewhere for family time.”

“Donut Fridays” have become a weekly morning tradition for Devon Cushman and her 9-year-old son. On Fridays, the Richmond, Va., resident wakes her son at 6 a.m., 15 minutes early, to go to Dunkin’ Donuts or Starbucks for breakfast before school, says the lawyer for a local bank.

“We aren’t necessarily having any sort of life-changing discussion, but with two working parents and busy schedules it’s nice to know we have some time to hang out just the two of us,” says Ms. Cushman. Dinners are truncated by her son’s triweekly evening soccer schedule, she says.

Taking a few minutes to sit with children while you drink your morning coffee may be enough. One of the few studies to investigate the value of family time at breakfast found teens who eat breakfast regularly with family in the room have lower rates of obesity and are less often overweight. They also eat more fruit, whole grains and fiber. 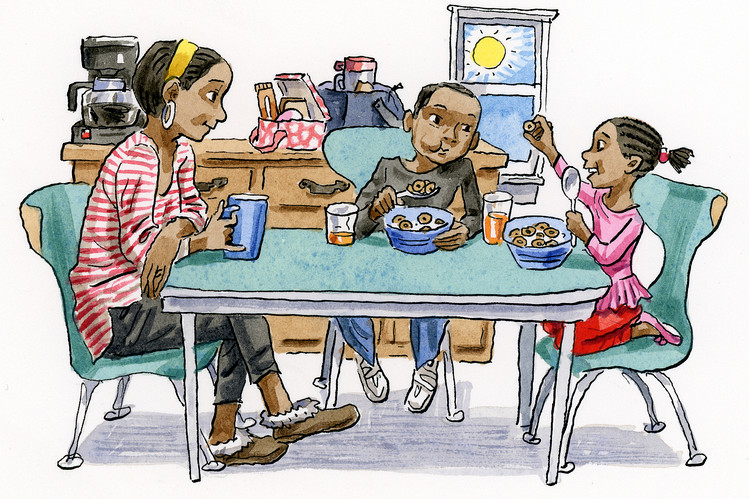 ENLARGE
Even sitting at the table to drink coffee with children can have a positive effect on their eating habits, says one study. ROB SHEPPERSON

Published in the Journal of the Academy of Nutrition and Dietetics, the 2013 study used data collected from 2,793 middle and high-school students from Minneapolis and St Paul, Minn., public schools and accounted for socioeconomic differences between families, how often they ate dinner together and other measures that might influence teen’s eating habits.

Portland, Ore., residents Lainie and Megan Decker work to carve out “parenting time” with their 2-and 6-year-old daughters most mornings, says Lainie Decker, an attorney. Megan Decker, also an attorney, finds it easy to sit down for breakfast with the children. “I am a breakfast eater,” she says.

But Lainie Decker describes herself as “antsy.” To make time to read a book or play a short game with the children, “I tell myself I’m going to stop, pause, take 10 minutes and go at a different intensity level,” she says. “A cup of coffee at my hair-drying station is probably what I want to be doing for breakfast.”