The downside to an extravagant wedding for your daughter 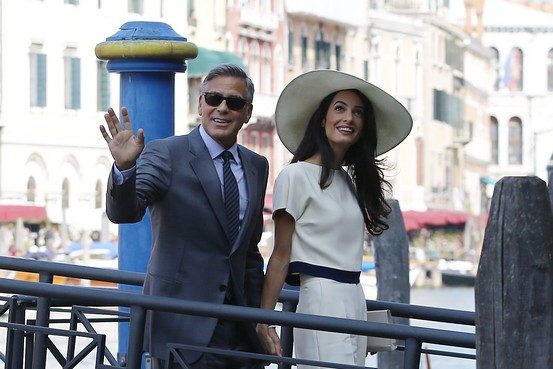 That was quite some wedding.

The location was Venice. The dress was Oscar de la Renta. The guest list included Matt Damon, Cindy Crawford and Bill Murray. And the groom, of course, was one of the world’s most famous bachelors.

George Clooney and human-rights lawyer Amal Alamuddin tied the knot last weekend in a four-day extravaganza that experts estimate might have cost somewhere in the region of $13 million.

Mr. Clooney can certainly afford it. I wish the new couple nothing but the best and a lifetime of happiness. None of what follows should be considered to apply to them, directly or indirectly.

But if the Clooney wedding leaves mere mortals feeling even more pressure to spend lavishly for their own “one perfect day,” they might want to pause first.

New research has found no positive correlation at all between having a big, expensive wedding and a successful marriage.

Quite the reverse. “We find evidence that marriage duration is inversely associated with spending on the engagement ring and wedding ceremony,” write Andrew Francis and Hugo Mialon, two economics professors at Emory University in Atlanta, in a paper published last month titled “‘A Diamond Is Forever’ and Other Fairy Tales: The Relationship between Wedding Expenses and Marriage Duration.” The study was based on the wedding budgets and marriage track records of more than 3,000 U.S. adults. 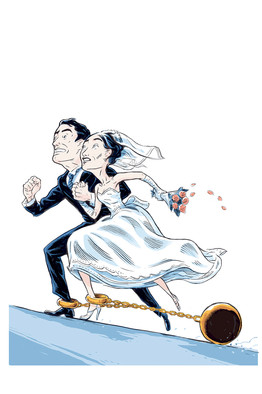 How much weight should we place on this? It is only one study. Messrs. Francis and Mialon themselves say the topic merits further research. And even if more expensive weddings are correlated with more divorces, that doesn’t mean they cause them.

“There’s a difference between correlation and causation,” says Anja Winikka, the site director at The Knot, a wedding industry magazine and website.

For example, expensive weddings may simply attract the kind of immature and narcissistic people who are less likely to sustain a successful marriage. Such people might end up getting divorced even if they married cheaply.

But there may be causation as well. An expensive wedding might in some cases be harmful.

Many financial experts warn that the cost of an expensive wedding can put a strain on a couple. Financial planners note that money troubles consistently feature as a leading cause of marriage problems.

The quest for a fairy-tale wedding may also raise unrealistic expectations about marriage. (Note to brides: Even if you do, miraculously, have a “perfect day,” you certainly won’t have a perfect marriage.)

A very lavish wedding can also be a problem for another reason: It can trap a conflicted fiancé or fiancée who is having second thoughts. Lady Diana Spencer had doubts during her engagement to Prince Charles. But there was no way the 1981 “wedding of the century” could be called off.

“It’s too late,” one of her sisters famously told her. “Your face is on the tea towels.”

This may sound far-fetched for those of us who are commoners, but I know someone to whom this happened. An extravagant wedding was followed by a relatively short and very unhappy marriage. It turned out later the groom had been conflicted. But a small village had already been commandeered, 500 acceptances received and flights booked from around the world.

The doomsday machine, once it has been turned on, cannot easily be turned off.

According to The Knot’s most recent annual survey, the average U.S. wedding last year cost $29,858, or about 60% of the median household’s income—up 11% since 2010. During the same time, reports the U.S. Labor Department, hourly wages have risen a princely 2%.

Mega-weddings are becoming more common too. Last year, says The Knot, one wedding in 10 cost between $50,000 and $100,000. That number has jumped sharply in recent years.

It wasn’t always this way. Messrs. Francis and Mialon have unearthed some startling data to offer today’s young couples some perspective. As recently as 1959, Brides magazine advised readers to spend two months planning their weddings. Today, the wedding industry says it takes a year.

The bride’s checklist has risen from 22 items to an extravagant multiple, depending on whom you ask. Supposed traditions such as the expensive white dress and the diamond engagement ring have been invented quite recently by their respective industries.

In a desperate bid to control costs, brides and grooms these days are starting to trim the number of guests, say experts. The Knot, for its part, reports that the average number of guests has declined in recent years to an average of 138.

The paradox: The Emory research suggests that instead of spending more money but having fewer guests, we should be doing the opposite. “The evidence suggests that the types of weddings associated with the lower likelihood of divorce are those that are relatively inexpensive but high in attendance,” write Messrs. Francis and Mialon.

Michelle Fait, a financial planner in San Francisco, says modern couples are under rising pressure from media, family and friends to spend more. Those who spend the most are often seeking external validation.

“Your marriage is supposed to last forever, so spend like there is a tomorrow,” she advises. When considering each potential wedding expense, she adds, just keep asking yourself: “Is this going to help us in our life together?”