You had an argument with someone your wife. Now what?

Why is making up is so hard to do? Widener University psychology program director Dr. Hal Shorey offers post-fight tips on Lunch Break with Tanya Rivero. Photo: iStock/CGrey

You had an argument with someone you love. Now what?

There is a definite wrong way to make up and go forward after a fight, therapists and psychologists say: Apologize quickly and move on.

Instead, it is crucial when repairing a personal rift to address the underlying issue. Fail to reach a resolution on the argument itself—not just the hurt feelings it caused—and you will end up fighting again in the future about the same thing. Even worse: You’ll likely end up arguing about the argument.

Throughout 28 years of marriage, Kim and Dexter Hardy in Marietta, Ga., say they have argued about “everything,” including money, the children and their in-laws. For years, their fights were very emotional and took a long time to get over. Mr. Hardy would say things that were sarcastic or hurtful. Ms. Hardy would yell or cry and sometimes throw things on the floor (once it was eggs). Then she would leave, slamming the door behind her. Often, the tension lasted for days.

“The biggest thing in making up is to understand that conflict is normal in a relationship,” says Hal Shorey, a clinical psychologist and associate professor for the Institute for Graduate Clinical Psychology at Widener University in Chester, Pa. Dr. Shorey studies personality and works with couples in private practice as well as people in conflict at work. “You don’t want to avoid it. You want to manage it.” 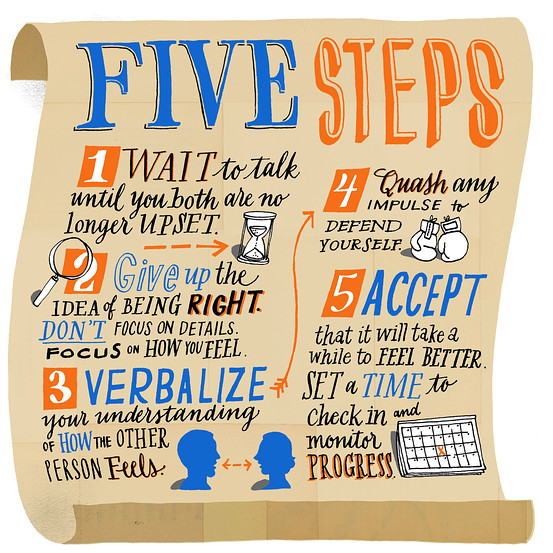 Admittedly, some people are comfortable with tension. They want to talk out problems.

Others avoid conflict at all costs. Some want it over immediately and need reassurance that all is fine (even when it’s not). Others refuse to address the situation at all and finish every disagreement with the same response: total silence.

Research shows that these approaches typically break down along gender lines. A 2003 study in the journal “Personal Relationships”—one of the largest on the topic to date—found that, across 62 cultural regions world-wide, men reported higher levels of attachment avoidance relative to women. There are always exceptions, of course. But, in general, men seek to avoid negative emotions and conflict more than women. Women like to talk through problems. Men want to move on.

A note about makeup sex: Men love it. Women? Not so much. Research shows that men are more sexually aroused after a major relationship conflict (and are more likely than women to use sex for stress relief). In contrast, women “find it more difficult to isolate themselves from the relational context while having sex,” says Gurit E. Birnbaum, a psychologist, sex researcher and associate professor at the School of Psychology at the Interdisciplinary Center in Herzliya, Israel. 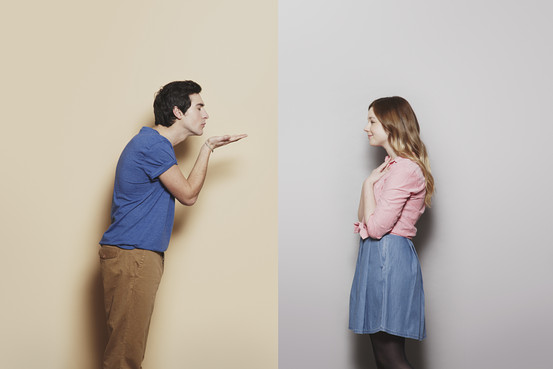 A hug, touch on the arm or eye contact all go a long way when making up after an argument. Getty Images

According to Dr. Shorey, of Widener University, there are five steps to a successful “makeup.” And they revolve around one central question that each person must ask the other: “What do you need from me?”

The first step: Wait to talk. “You don’t want to have a discussion while the other person is still hot,” Dr. Shorey says. “I can’t tell you how many people will think it’s better to say right away: ‘I’m sorry. I was a jerk.’ And the other person says, ‘Yes, you were.’ And then the argument escalates again.”

If the other person is really trying to avoid a discussion altogether, wait until things have calmed down and then say, “I’d like to talk.” If the argument was really intense, he suggests making up in a public place, such as a restaurant. And never have these discussions in front of the kids.

Next, give up the idea of being right. Don’t focus on the examples or details from the fight; those will be right or wrong depending on your perspective. Instead, focus on the other person’s feelings. “What can never be wrong is how the other person feels,” Dr. Shorey says.

Third, mirror the other person’s position by verbalizing your understanding of how he or she feels. This helps you focus on the other person’s needs. For example, you can say: “I understand you are hurt because I went out without you last night.” And ask if you are correct. 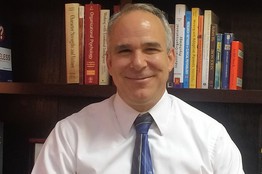 “A lot of people don’t want to apologize because they don’t want to admit that they did anything wrong,” Dr. Shorey says. A good approach: “I am sorry I upset you. I don’t think there is anything wrong with me going out last night, but I can see why you feel hurt and how it would be better for me not to go because I don’t want you to feel bad.”

An important point here: Never use the word “but” in an apology. “I am sorry, but…” undermines the entire purpose.

Don’t get offended by your partner’s feelings. If you apologize and the other person says, “Yes, you really behaved badly,” just nod your head. The goal is to accept responsibility for how you made someone feel.

Finally, explain to your partner that you really care about him or her and are willing to modify your behavior. (A hug, touch on the arm or eye contact all go a long way here.) Both people must show that they understand each others’ needs and are willing to try and meet them. “If the other person knows that you really care,” Dr. Shorey says, “most of these larger issues will resolve.”

Accept that it may take some time for you both to feel better. And make a pledge to check in later, after a certain amount of time has passed, in order to monitor progress. “Hey, I heard how I hurt you and have tried to change and how am I doing?” never hurt.

For the Hardys, years of arguing took its toll. They felt disconnected. Ms. Hardy says she got tired of the anger and frustration she was carrying around.

The couple began to attend marriage workshops, read self-help books, and model themselves on older couples they thought communicated well. They learned they have different makeup styles. She needs space to calm down. He likes to talk out issues.

They have developed several strategies to move past an argument. The first is decompression time: Ms. Hardy will excuse herself and go into another room or leave the house so she can “finish huffing and puffing,” she says. The next is fact time: Each will remind him- or herself about the good qualities of their spouse. Then, instead of a short, “I am sorry,” the apologizer will say exactly what he or she did wrong.

“We don’t always have to agree, but we have learned to respect one another’s opinions,” says Ms. Hardy, a 47-year-old motivational speaker.

Write to Elizabeth Bernstein at Bonds@wsj.com