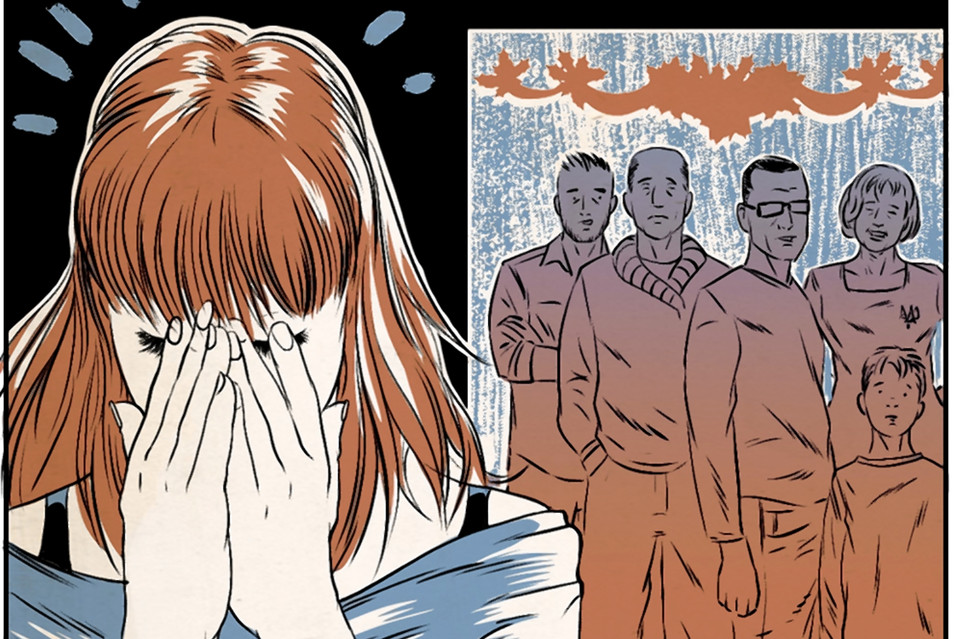 A family tantrum—where everyone is arguing and no one is listening—often starts when one person (the ‘trigger’) takes offense at a real or imagined slight. But there are usually bigger issues at stake. DOMINIC BUGATTO

It started with a blueberry scone. In their suite at a London hotel—with a view of the Kyoto Garden in Holland Park and the sound of harp music wafting up from the lobby—Heather Tobin’s two sisters both reached for the last scone on the breakfast tray at the very same moment.

One sister grabbed it. The other tried to swipe it away. The two women, in their 20s at the time, bickered and then quickly moved on to insults: “Do you have jet lag, or is this your own usual selfish self?” one asked. “I’m glad I don’t have to live in the same house with you anymore,” the other shot back.

Ms. Tobin, 30 years old at the time and vacationing with her family to celebrate her mother’s birthday, jumped into the fray. “This is ridiculous, we’re on vacation. Calm down,” she said. One sister threw the scone at her. 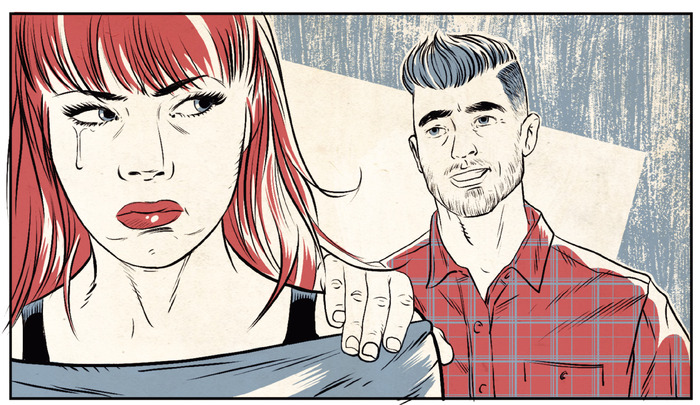 Another person, perhaps a sibling, takes on the role of the ‘prosecutor.’ He may have decided in advance to call the trigger on her behavior. DOMINIC BUGATTO

The women stormed down the hall to their parents’ room overlooking the atrium lobby to complain. Their mother yelled at them for acting like children. Their father bellowed: “You are behaving like animals.” The parents fought with each other in the hallway about how to deal with their children.

Eventually, everyone went back to their rooms and slammed their doors. Down in the lobby, the harpist, who had stopped the music because of the commotion from above, began playing again. “We all love each other,” says Ms. Tobin, now 45 and an antiques dealer in Kingston, N.H. “But we regressed.”

Did you spend time with family this past weekend? If so, you may have taken part in or witnessed a family meltdown—or are bracing for your turn.

An argument where everyone is talking and no one is listening is a hallmark of what clinicians call “stuck” or dysfunctional families. Yet even healthy families occasionally exhibit the behavior, they say.

Others soon jump in, either to take sides with the trigger or prosecutor, or to attack both for fighting. DOMINIC BUGATTO

While reporting this column, I heard about epic, multigenerational meltdowns at birthday dinners, in hospital waiting rooms and in taxicabs hurtling down New York City’s West Side Highway. One family had a screaming match in the middle of the street in Tahoe City, Calif. Another traded shoves while waiting in line to board an airplane. My cousin Sarah responded to my query with just five words: “The Bernsteins. Look no further.”

Most times these arguments start because of something small, like a blueberry scone. But the quarrel itself is about a much-larger matter—competition, power, favoritism. These fights hark back to childhood, and may contain echoes of previous generations’ conflicts.

“If someone’s reaction is way bigger than the actual harm done to them, it’s old stuff,” says Candida Abrahamson, a life coach and family mediator in Skokie, Ill., who studies family systems. 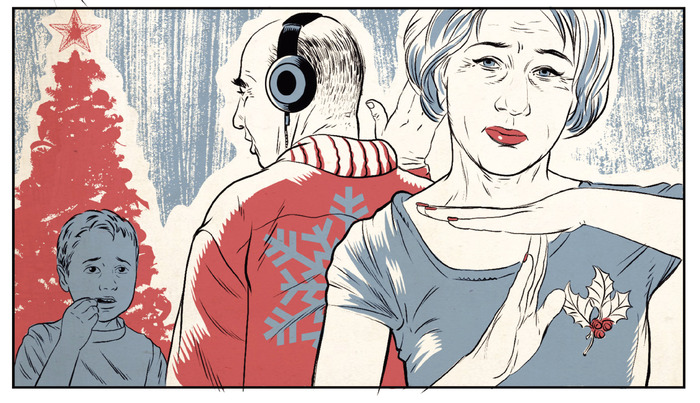 An ‘enabler’ may talk about ending the fight, but without resolving the conflict. A ‘passive enabler’ checks out of the scene, physically or mentally. DOMINIC BUGATTO

Meltdowns take different forms. In some families they are silent. Experts in family dynamics say they typically unfold like a movie plot, along predictable lines with a familiar cast of characters.

First there is the “trigger.” This person gets things started by acting out, often taking offense at a real or imagined slight. The trigger may see him- or herself as the outsider or victim of the family with old grievances to air (“You were always mom’s favorite”).

Someone, often a sibling, reacts to the trigger by taking the role of “prosecutor.” This person may have decided ahead of time to point out the trigger’s “bad” behavior so he or she will improve. (“Stop being so sensitive!”)

This exchange is a signal for others to jump in. A “defender” or “peacemaker” might stick up for the trigger (“Back off, OK?”), or might chime in with the prosecutor. Others might attack both (“You two ruin every family gathering!”). 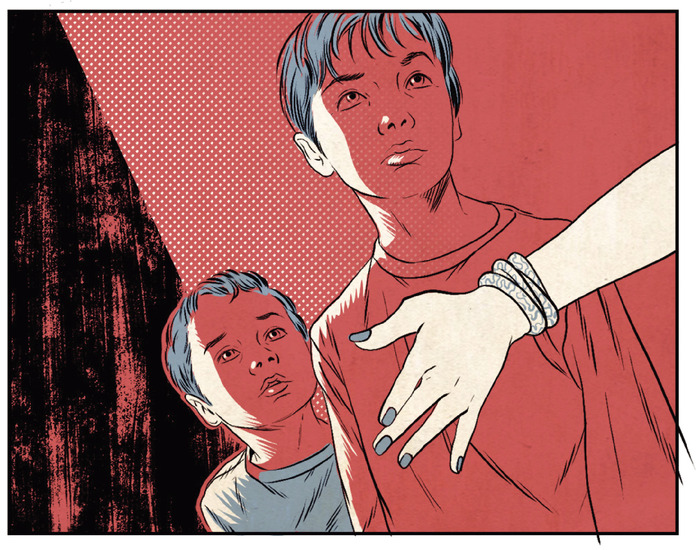 ‘Deserters’—in-laws or others who aren’t involved—steer clear of the fight and get busy distracting children or herding them away. DOMINIC BUGATTO

Parents and other family members fuel the conflict with inaction. An “enabler,” typically the mother, talks about ending the conflict (“Please, let’s just all get along!) but may really be trying to sweep it under the carpet. A “passive enabler,” perhaps a father, distances himself from the meltdown by marching from the room. (My father has been known to retreat to his study and don his skeet-shooting headphones.) The “deserter”—an in-law or someone else not in the thick of fight—herds children away from the scene.

Families tend to have more meltdowns when they have unresolved conflict and when they value individual self-expression over repression. Are these blowups ever productive? Experts say only if the participants can come to a respectful resolution.

“You can have a positive outcome from conflict, but then you have to be willing to see other people’s perspectives,” says Eli Finkel, a professor of psychology at Northwestern University (who is Dr. Abrahamson’s son).

Experts say it is possible to step back during a tense moment and help steer the family back on course. Someone will need to remain calm. It might as well be you.

It will take some advance planning, not just nervous anticipation about what might go wrong. Many people brace themselves for the worst, and think about what they will say or do if someone upsets them. “All this does is raise your anxiety,” says Pauline Wallin, a Camp Hill, Pa. clinical psychologist.

Reframe the event in your mind (“It might be stressful, but there are many worse things to go through”). Give yourself the job of enjoying the gathering. “You have a responsibility to try and make this a happy experience for other people,” Dr. Wallin says.

Make a resolution, Dr. Finkel says: “I am going to finish this family get-together being proud of my behavior and knowing that I behaved like an adult.”

In a study at Northwestern published in the journal Psychological Science in August 2013, Dr. Finkel asked 120 couples to write every four months for a year about a fight they’d had, half of them writing from their own perspective, and half from the perspective of a neutral third party. The couples that wrote from the third-party perspective rated their relationships as happier and better connected. Dr. Finkel believes the technique can apply to families too.

Another technique is “if then” planning. You expect specific behaviors from your family and plan your own specific reactions. (“If my sister starts to brag about her kids, then I am going to agree with her and tell her what she wants to hear.”)

To recover from a family meltdown, ask the person who is upset what’s wrong and offer to listen. Susan Kuczmarski, a lecturer at Northwestern University’s Kellogg School of Management and author of “Becoming a Happy Family,” published last month, says, “Identify something that is important for the person and spend a little time on it. A little compassionate asking, listening and reaching out within the family is sometimes all that’s really needed.”