When Being Alone Turns Into Loneliness, There Are Ways to Fight Back

Loneliness is as strong a predictor of early death as alcoholism and smoking 15 cigarettes a day, and it turns out you don’t actually have to be alone to feel lonely. Elizabeth Bernstein has the latest research and Leeanne Rebic Hay shares her experience. Photo: Getty Images.
I spend a fair amount of time by myself. One recent day, I worked, read, cleaned my desk, took a walk, made soup and chatted with my best friend on the phone. By evening, I felt productive and content.

Then, for the first time in hours, I checked my phone. There was not one new text, call or email—not even from Groupon. Wasn’t anyone thinking of me?

It got me thinking: How does being alone turn into being lonely?

Some people crave time alone, but experts say occasional feelings of loneliness are a near-universal experience. 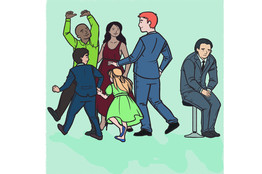 Experts say lonely people often create that feeling by telling themselves a story with the theme “Nobody likes me.” Tanya Lam

Evolutionary psychologists say the lonely feeling developed to alert humans—social animals who rely on each other to survive—that they were too close to the perimeter of the group and at risk of becoming prey.

Spending time alone is more fun when it is by choice. When it is the result of loss, separation or isolation, people are likely to experience it as loneliness. Homesickness, bullying, empty-nesting, bereavement and unrequited love are all variations on the theme. Loneliness isn’t depression, which is a lasting feeling of deep sadness and hopelessness and should be treated by a professional.

Researchers at Brigham Young University studying the correlation between social relationships and mortality did a 2010 meta-analysis of 148 studies encompassing more than 300,000 participants. They found loneliness was as strong a predictor of early death as was alcoholism or smoking 15 cigarettes a day, and it was a stronger predictor than obesity or a sedentary lifestyle.

The rate of loneliness in the U.S. has doubled in the past 30 years, says John T. Cacioppo, a psychologist and director of the Center for Cognitive and Social Neuroscience at the University of Chicago, who studies loneliness including analysis of several large studies. These days, he estimates, some 40% of Americans report being lonely, up from 20% in the 1980s. 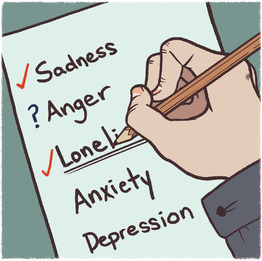 It can be tricky to recognize loneliness, even after a breakup, separation or loss. Some experts define it as social isolation or dissatisfaction with one’s relationships. It often has an emotional trigger. Tanya Lam

Why are we experiencing more loneliness? Many more American adults live alone than ever before, with the percentage of one-person households rising to 27% in 2012 from 17% in 1970, according to the U.S. Census Bureau. As baby boomers age, they are dealing with more solitude and seclusion. And, to be frank, many of us spend way too much time behind electronic screens and not nearly enough on our real, in-person connections.

You don’t have to be alone to be lonely, as anyone who has suffered through a bad relationship or an awkward holiday gathering can attest. “Loneliness is the feeling of social isolation or dissatisfaction with your relationships,” Dr. Cacioppo says. “It’s not just about whether there are others around you. It’s about whether the ones around you are those you can trust.” Some people are genetically more prone to loneliness than others, he says.

Men and women experience loneliness at roughly equal rates, Dr. Cacioppo says, but the kinds of social interaction they may be missing are different. Women generally long for face-to-face social interactions, whereas men are looking for a collective sense of connecting within a group. (So that explains the Super Bowl!)

Therapists say loneliness, in its most unhealthy form, is a distorted way of thinking that often has an emotional trigger—whether it is a big change like a breakup or a geographic move, or something as simple as attending a wedding alone or bickering with a sibling.

The result is the same. Our subconscious rewinds back to when we were young and worried someone else wasn’t going to be there to take care of us. It is the negative thought “I don’t matter.” 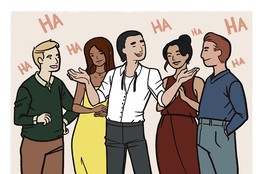 Some experts say loneliness is evoked by an “emotional memory” of being a child in need of help. Remind yourself that you aren’t that child anymore. You have people in your life and can bring in more.Tanya Lam

“Loneliness can be evoked by an emotional memory,” says Lauren Mackler, a Boston psychotherapist and relationship coach and author of “Solemate: Master the Art of Aloneness and Transform Your Life.”

Leeanne Rebic Hay, a 54-year-old freelance writer in Plano, Texas, considers herself lucky that she learned to enjoy time spent alone. She was an only child, attended private school and had a working mother and few friends in her neighborhood.

Her mother encouraged her to go alone to the library or to swim at the YMCA, and to learn to cook and sew. “I would tell my mother, ‘I don’t want to go there,’ and she would say, ‘Go, you don’t know who you will meet,’ ” recalls Ms. Hay. “She taught me you can choose not to be lonely.” 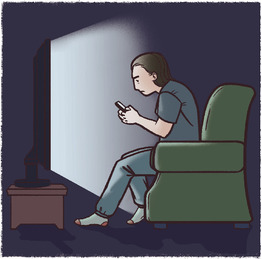 A lonely person may have a strong impulse to isolate himself further. Some activities, like reading, really are best enjoyed alone. But to conquer loneliness, it is necessary to make an effort to look outward. Tanya Lam

As an adult, Ms. Hay got through lonely times after a divorce by attending the opera solo, exploring new cities when traveling for work, doing volunteer work and taking a cake-decorating class. She says she taught her children to be similarly self-sufficient. Still, Ms. Hay says she was surprised by how lonely she felt following the death last month of her 13-year-old terrier, Marty.

After Ms. Hay remarried, Marty was her constant companion: He went with her every morning to pick up the mail, kept her company in her home office, took afternoon walks with her and made a giant fuss over her whenever she came back home after going out without him.

Now, she relies on skills she learned as a child, gardening, writing and cooking. “You can tell yourself, ‘I am alone, nobody likes me, everyone hates me,’ ” she says. “But you have to ask yourself: ‘What can I choose to do to not feel lonely?’ ”

To stop “alone” from sliding into “lonely,” start by recognizing that you are the one telling yourself that you feel lonely. “You are creating the experience of loneliness by how you are thinking and behaving,” Ms. Mackler says. 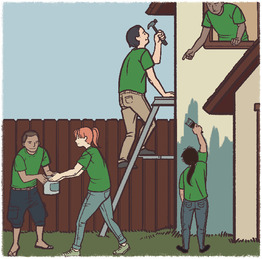 Imagine new places to go and things to do that will create new experiences other than loneliness. Join a club, or volunteer. Make it part of your routine to get out and be around people. Tanya Lam

Acknowledge that you feel bad. “The uncomfortable feelings are there. They are not going to go away on their own,” says Pandora MacLean-Hoover, a licensed independent clinical social worker in Cambridge, Mass. “It’s good to acknowledge them and then try to think differently.”

Change the mental story you tell yourself. Remember that there are people who care about you; they may just be busy at the moment.

Turn being alone into a positive. Do things you enjoy doing alone, like reading or walking. But make it part of your routine to be around people. Join a club, volunteer. If all else fails, have dinner at the bar in your favorite restaurant. Talk to the bartender.

How did I get over my recent bout of loneliness? I read a few chapters of a hilarious Carl Hiaasen book. Then I checked my phone. I had 24 new messages. It turns out my phone had been turned off before.

My next thought was, “What do all these people want? Why can’t they leave me alone?”